How To Get Cheapest 2019 Trail Blazers Playoff Tickets 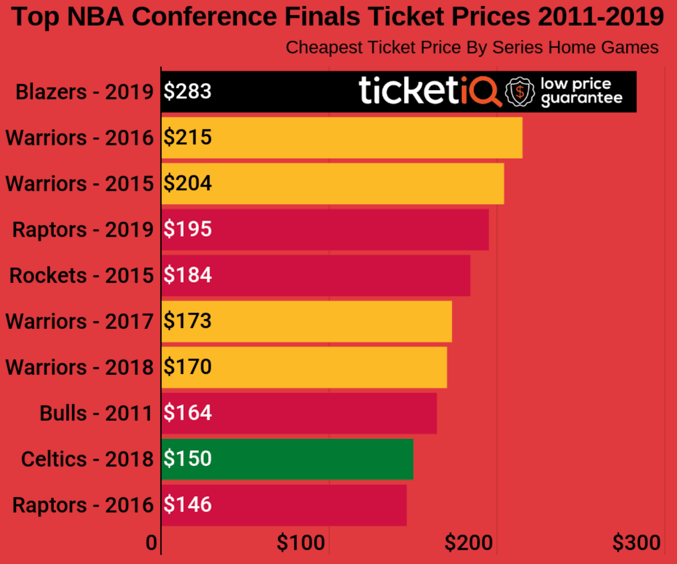 Despite this being their 5th consecutive Western Conference Finals for the Warriors, it's the most expensive combined western conference finals that we've tracked, just ahead of last years WCF between the Warriors and Rockets.  If the Blazers are able to advance, it currently costs about $1000 for a ticket to the NBA Finals for the cheapest seat in building. 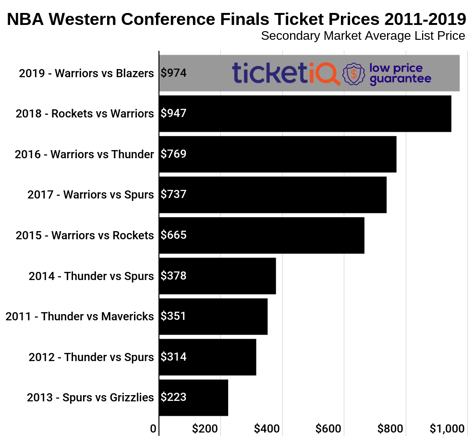 The Portland Trailblazers have already clinched a spot in the playoffs, their sixth consecutive since 2013-14. As of April 4, Portland was one of four 50+ game winners in the Western Conference, and was sitting in second in the Northwest Division behind Denver.

During the regular season, the Blazers had the third cheapest average asking price on the secondary market among NBA teams, according to secondary ticket marketplace TicketIQ.com. The $92 average marked a drop of nearly 19% from 2017-18, when the average was $113.

There is usually more demand for playoff tickets. According to TicketIQ.com, postseason tickets are generally 54% more expensive than regular-season tickets. Primary market tickets are now currently available via Ticketmaster.

Shoowin has reservations for most potential NBA playoff games at Portland, though the market for the first round are already closed, according to the site. Should the Blazers get deeper into the playoffs, fans can reserve tickets for home Western Conference semifinal games starting at $10 for home Games 1 and 2, and $40 for potential home Game 4. Western Conference finals reservations range in price from $4-$14.

If the Blazers get to the NBA Finals – which would mark the first time since 1991-92 – fans can reserve seats at Portland starting at $15.

Portland has won one NBA title since joining the league as an expansion team in 1970-71. It beat Philadelphia in six games in 1976-77. The Blazers went to advance to two other NBA Finals, in 1989-90 and 1991-92, but lost both times. Portland hasn’t advanced past the conference semifinals this century, and has made it to the playoffs 11 times since the start of the 2000 season.

If you’re looking for a way to spend your Christmas Day, the NBA has you covered, with five games across the country starting at noon ET with the Boston Celtics at the Toronto Raptors and the…

Where to Find Cheapest Kings Vs. Trail Blazers Tickets for 2019-20 Season