Primary market face-value tickets are sold out via Ticketmaster.

On the secondary market, TicketIQ has Fee-Free MLB All-Star Game tickets & Home Run Derby tickets, which also include a Refund Guarantee. Our Refund Guarantee states that if an event is canceled or deemed unfit for fans to attend, TicketIQ will refund ticket buyers in as soon as 15 days. That means that you can buy from TicketIQ worry-free. Customers on TicketIQ save between 15%-25% compared to other secondary market ticketing sites.

How Much Are 2021 MLB All-Star Game Tickets

On the secondary market, ticket prices for the MLB All-Star game start at $191 for General Admission tickets. 400 level ticket prices start at $295, 300 level tickets start at $317, 200 level seats start at $429, and 100 level seats start at $349 in the outfield and $457 in the infield. Prices go as high as $2,000+ for seats behind the dugouts and home plate. Face prices started as low as $145 for Lower Rooftop Reserved seats.  Visit MLB.com for a full list of face prices across every event and section of Coors field.  The most expensive face value for Tuesday is $460 for Lower Infield Boxes.

Below is a look at how prices for the 2021 All-Star Game compared to previous seasons: 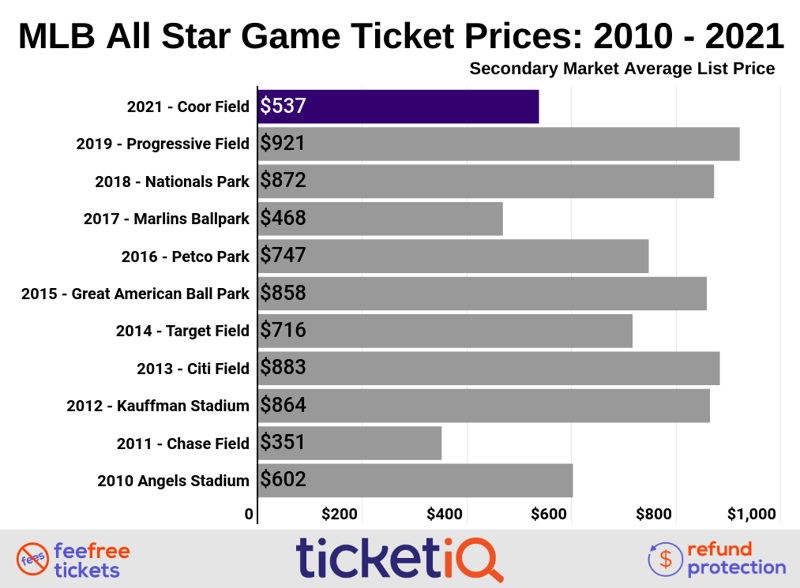 How Much Are 2021 MLB Home Run Derby Tickets 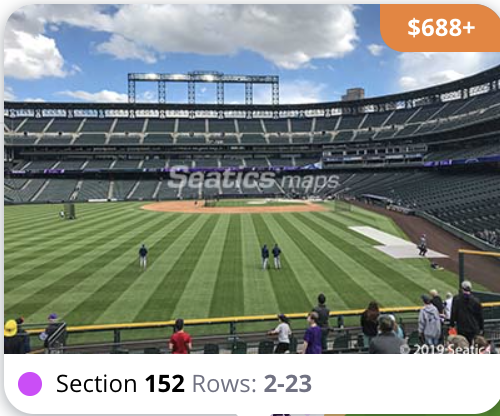 Below is a look at how prices for the 2021 Home Run Derby compared to previous seasons:

Coors Fields will begin operating at full capacity for Colorado Rockies games starting on June 28th. It is expected to remain that way for the All-Star game, which takes place on July 13th.

How To Find The Cheapest 2019 MLB All-Star Game Tickets

Baseball fans who want to see the best of the best play America’s Pastime should be ready to pay a pretty penny — demand for Major League Baseball’s All-Star Game is at an all-time high, with the average asking price currently at $767 on the secondary market. The game is set for Tuesday, July 9 at Cleveland’s Progressive Field. The last time Cleveland hosted an All-Star Game was 1997.

The get-in price for the game is a hefty $279, and the average asking price is down a bit from the $872 average price last season at Nationals Park in Washington, D.C. The cheapest ASG this decade cost fans $351 at Chase Park in Phoenix in 2011. 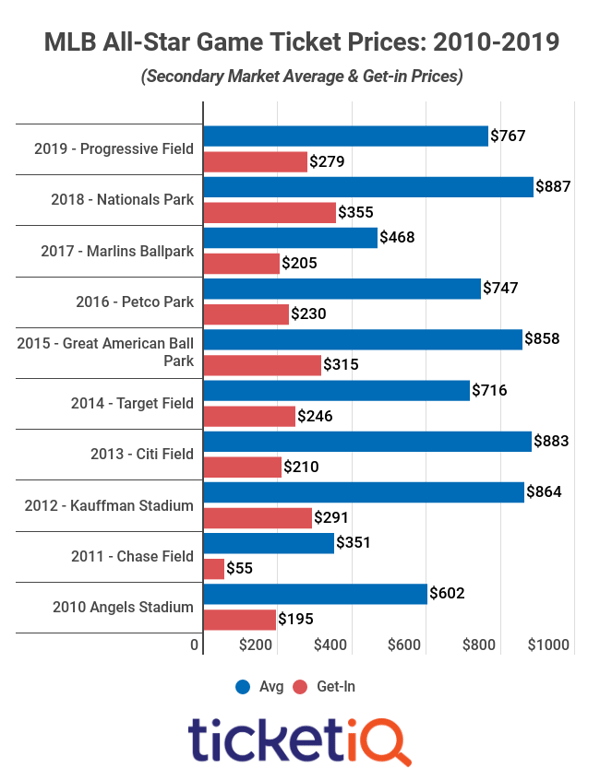 Primary market tickets to the Home Run Derby are available on MLB.com, starting at $250 for seats in the 500 sections. On TicketIQ, the least expensive Home Run Derby tickets are for standing-room only, but there is a wider selection than on the primary market. Home Run Derby participants include, Blue Jays rooking Valdimir Guerrero Jr., Cleveland's Carlos Santana, Mets rookie Pete Alonso, reigning NL MVP Christian Yelich of the Brewers, Josh Bell of the Pirates, and Braves center fielder  Ronald Acuna, and the winner’s prize has been increased to $1 million.

Fans get into the All-Star spirit without spending for the Derby or the game. Events around the ASG start on Friday, July 5 when the Play Ball Park opens at the Huntington Convention Center of Cleveland and The Malls. The interactive experience has more than 40 attractions from a collection of 750,000 Topps baseball cards to a chance to play in a virtual Home Run Derby to hitting a simulated walk-off home run to riding a zip line. Tickets to Play Ball Park are available on MLB.com. Single-day tickets cost $25 and there are discounts for military, group purchases and more.

In addition, fans can get tickets to concerts by Twenty One Pilots on Friday, July 5 and The Killers on Saturday, July 6, both which will be at the Play Ball Park

A ticket to this week’s Major Legaue Baseball All-Star Game won’t be cheap. According to data from TicketIQ.com, the average asking price on the secondary market for both the Home Run Derby (Monday) and All-Star Game at Washington’s Nationals Park, are the highest of the last five years.

This year’s Home Run Derby, which features hometown favorite slugger Bryce Harper, has the highest average asking price by a mile. The next closest in the last five years was $417 at Minnesota’s Target Field in 2014 when hometown favorite Brian Dozier joined a roster that included such well-known sluggers as Yoenis Cespedes, Jose Bautista, Giancarlo Stanton and Troy Tulowitzki.

The record asking prices are even more remarkable given that, according to TicketIQ.com, there has been a 9.7 percent drop in the Home Run Derby's average price and 6.4 percent drop to the All-Star Game's average asking price over the past week.

The American League and National League have traditionally been well-matched, as the teams have a series record of 43-43-2, though the AL has won the last five games. The game no longer determines which league will get home-field advantage in the World Series.

Nationals Park will host its first Major League Baseball All-Star Game and the first since 1969 in the city of Washington, D.C. on July 17. And demand reflects the city’s enthusiasm for bringing baseball’s star-studded annual event to the nation’s capital.

According to TicketIQ.com, the average asking price for a ticket to the game at Nationals Park is $872 on the secondary market, making it the second highest average asking price since TicketIQ began tracking data for the event in 2010. The most expensive ticket was $883, for a seat at New York’s Citi Field in 2013. The cost of a ticket to the All-Star game on the secondary market has only broken through the $800 barrier two other times this decade – in 2012 when fans paid an average of $864 at Kansas City’s Kauffman Stadium and in 2015 when fans paid an average of $858 at Cincinnati’s Great American Ballpark.

The cheapest ASG ticket of the decade on the secondary market was $351 in 2011 at Arizona’s Chase Field.

Fans interested in a chance to see the best in the game launch home runs can buy a separate ticket for the Home Run Derby, which will be July 16. Among the players expected to participate in the Derby this year are New York Yankees’ sluggers Aaron Judge and Giancarlo Stanton as well as Minnesota Twin Miguel Sano.

The current average asking price for a ticket to the Derby is $402, making it the third most expensive of the decade on the secondary market. The priciest Home Run Derby was at Kauffman Stadium, when fans paid an average of $499, to see Prince Fielder win with 12 dingers in the second round to tie Robinson Cano’s record set in 2011.

The only other time Derby tickets broke the $400 barrier this decade was 2014, when the average asking price settled at $418 at Minnesota’s Target Field. When it comes to overall sporting events in Washington DC, this year's All-Star game is the 5th most expensive in DC this decade.