Earlier this week, USA Today reported that Major League Baseball has changed its ticket policy and will allow teams to determine their own policies for games postponed by the COVID-19 pandemic, which would allow ticket-holders to receive refunds. Nearly every team has released their updated policies, and you can find a link to your favorite team's update below.

Teams are offering a variety of option for fans, including credits, exchanges, and almost all of them are now offering full refunds. Most teams are offering refunds for games scheduled through May. A full list can be seen below:


Prior to this, the MLB had told teams to treat lost games as postponements, and that those ticket buyers could use the tickets for a makeup date or another game.

It was also reported that MLB officials are optimistic that the 2020 season will happen, and most likely begin in late June or early July.

MLB is considering a three-division, 10-team plan in which teams play only within their division – a concept gaining support among owners and executives. It would abolish the traditional American and National Leagues, and realign the divisions based on geography.

The plan, pending approval of medical experts and providing that COVID-19 testing is available to the public, would eliminate the need for players to be in isolation and allow them to still play at their home ballparks while severely reducing travel.

The article also stated that the games would most likely be played without fans in attendance.

With a month of the season already wiped away, we estimate the lost revenue for secondary market MLB tickets is just under $1 billion. That estimate is based on secondary market value, average attendance from the 2019 season, and the number of games canceled. This is not a precise measure, but the simplest way to benchmark the magnitude of losses, by team. Below is a breakdown: 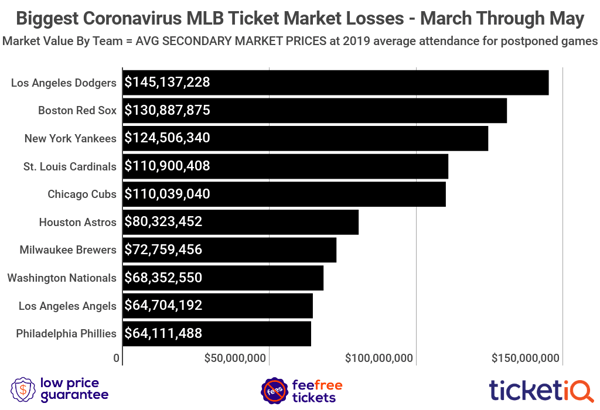 Where to Find The Cheapest 2021 MLB Playoff Tickets

Where To Buy 2021 MLB Playoff Tickets Primary market face-value MLB playoff tickets for most teams are available via their website, or Ticketmaster.

How To Find The Cheapest Spring Training Tickets + 2021 Attendance Policy