Ten-time La Liga champion Atletico will put Major League Soccer’s all-stars to the test when the two kick off July 31 in MLS’ annual All-Star Game at Orlando’s City Stadium. It will be the first time that Atletico has played against the MLS All-Stars and the 16th time an elite international club has been the opponent in the All-Star game.

Demand for the MLS All-Star game tickets is lower than it has been in recent years on the secondary market, according to secondary ticket marketplace TicketIQ.com. The current average asking price of $212 is the sixth most expensive since TicketIQ began tracking data in 2011. The priciest average asking price was in 2011, when fans paid $290 to see the All-Stars play Manchester United of England's Premier League at Red Bull Arena in suburban New York City. Last season’s matchup against Juventus of Italy's Series A at Atlanta’s Mercedes-Benz Stadium was the second most expensive at $287. 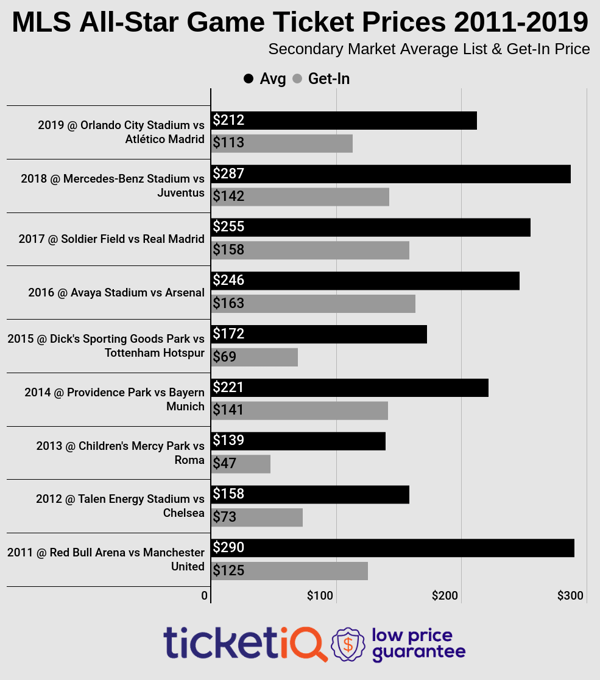 The cheapest MLS All-Star game of the decade cost fans $139 to see Roma at Children’s Mercy Park in Kansas City.

The get-in price for this year's game on the secondary market is $113, also the sixth cheapest of the decade.

The 2018 Major League Baseball game cost fans an average of $872 on the secondary market last year at Washington’s Nationals Park.

Atletico is the second La Liga team to play against the MLS All-Stars. Real Madrid played the MLS All-Stars in 2017 in Chicago. MLS All-Stars have played teams from many of Europe’s elite leagues, including sides from the English Premier League, Italy’s Serie A, and Germany's Bundesliga. MLS is 8-4-3 against international competition in the All-Star game.

Orlando City SC season-ticket holders will get priority access to All-Star Game tickets on the primary market. Pre-sale tickets went on sale on May 3, tickets will be available to the general public through Ticketmaster beginning at 10 a.m. ET on Thursday, May 9. Secondary market tickets are already available on TicketIQ.com.

MLS will also host a week of events and programming surrounding the game in Orlando, including a concert, community service initiatives and player appearances, as well as an additional showcase match featuring the best young players from around the league.

Major League Soccer will hold its 22nd annual All-Star Game on August 2, 2017, and the contest will return to Illinois for the first time in 11 years. Soldier Field will take up hosting duties for the game, which expects to have the third-largest crowd of any MLS All-Star Game. In the 1996 inaugural All-Star Game at Giants Stadium in East Rutherford, New Jersey, the attendance was 78,416, which still stands as a record for an MLS All-Star Game.

Since 2011, the most expensive MLS All-Star game was the 2016 one held at the San Jose Earthquakes’ Avaya Stadium. On TicketIQ, 2016 MLS All-Star Game tickets averaged $352 and the get-in price was $228. The least expensive recent All-Star Game was in 2013 when tickets started at $47 and averaged $139 at Sporting Kansas City’s Sporting Park, which has since become Children’s Mercy Park.

In 2006, the All-Star Game was held at the Chicago Fire’s Toyota Park, as the MLS All-Stars defeated Chelsea, 1-0. The game has since traveled around the country and even north of the border in addition to Reliant Stadium, which is now known as NRG Stadium and is the home to the Houston Texans and Super Bowl LI on February 5. The Reliant Stadium All-Star Game in 2010 had an attendance was 70,728.

The Chicago Bears’ home field, which has held the 1994 FIFA Men’s World Cup, 1999 FIFA Women’s World Cup and several CONCACAF Gold Cups, holds more than 60,000. The previous three MLS All-Star Games had a combined attendance of 58,404, so Major League Soccer will look for impressive turnout on August 2 at Soldier Field.

et ready for a starry night in San Jose, soccer fans. The 2016 MLS All-Star Game will be held at Avaya Stadium on Thursday, penning the league's best players against Arsenal. It will be the 12th time the All-Stars play against foreign competition, and with kickoff quickly approaching, tickets for the star-studded affair are the most expensive in the last six years.

The average price for 2016 MLS All-Star Game tickets on TicketIQ is now $245.94. Not since 2011 has the game's average price been higher, when it was held at Red Bull Arena in New Jersey and tickets averaged $289.62. The cheapest ticket to Thursday's game is now listed from $163 in Section 118.

Perhaps the big demand for tickets is due to the game's venue. Avaya Stadium officially opened in March of 2015, and the stadium's state-of-the-art allure will likely attract droves of traveling fans from out of state and, perhaps, out of country. The $100 million stadium is a flashing new point of entertainment in the Bay Area, and the numbers have been promising thus far. In 2015, the Earthquakes owned a 117% attendance record, good enough for best in the league.

The 2016 MLS All-Star Game will kick off at 7:30 pm ET Thursday night. Check out the complete MLS All-Star and Arsenal rosters below:

Fans searching for tickets are in luck, too – this year’s All-Star Game is the cheapest it’s been since at least 2010 on the secondary market. According to TicketIQ, the average secondary price for 2015 MLS All-Star Game tickets against the Spurs is currently $136.39, marking a 38.1% drop from last year’s average of $220.55 at Providence Park in Portland, Oregon. The cheapest available ticket to this year’s game in Colorado is now $70. Only 2013’s game at Sporting Park in Kansas City had a cheaper get-in price at $47.

The game had its most expensive year in 2011 at Red Bull Arena in New Jersey, when tickets owned a secondary average of $289.62. Since then, the MLS All-Stars have participated in just one other game that owned a ticket average above $200 – last year’s exhibition game against FC Bayern Munich at Providence Park, where tickets averaged at $220.55.

Below is the official Fan XI roster  for this year’s game in Colorado. Make sure to check back here for all MLS All-Star Game news and ticket price updates.

How To Find The Cheapest 2021 CONCACAF Gold Cup Tickets

The Gold Cup is the region's flagship international tournament, featuring men's national teams from across North America, Central America, and the Caribbean. First contested in 1991 and taking…