The defending MLS Cup champion Seattle Sounders FC and their MLS Cup Final opponent Toronto FC are both No. 2 seeds in their respective conferences. The Sounders will take on No. 7 LAFC on November 24, but there will be plenty of Major League Soccer action before that contest. There will be 10 MLS contests played from November 20 to November 24, including an off day on November 23. The opening night of the MLS Cup Playoffs kick off on November 20 with two play-in games, and then two first-round contests will be played the next day. ESPN will be covering the majority of MLS Cup Playoffs, and fans will have the opportunity to get tickets for some of the games.

Depending on the team, primary market face value tickets for the 2020 MLS Cup Playoffs can be purchased on Ticketmaster, Seatgeek, AXS, and Paciolan.

Secondary market tickets are also available, but inventory is limited. TicketIQ will have Fee-Free tickets with a Low Price Guarantee and Refund Guarantee, which states that in the event an event is canceled or deem unfit for fans to attend, TicketIQ will refund ticket buyers in as soon as 15 days. That means that you can buy from TicketIQ worry-free. With the Low Price Guarantee, if you find the same ticket for less on another secondary market ticket for less on a site like StubHub or Vivid Seats, we’ll give you 200% of the difference in ticket credit.

How Much Are 2020 MLS Cup Playoff Tickets

Nashville SC announced on 11/12 that a limited amount of tickets would be made available for Nashville's Eastern Conference Play-In Match.

Tickets are limited to just 1,240 instead of the maximum 21% capacity due to a scheduling conflict. Tickets are available for purchase starting today at 10 a.m. CT for $35. Season ticket members have priority, and will be able to purchase "two to six seats based on the number of seats in their account." Fans who do qualify for seats will be emailed instructions on how to purchase their tickets.

The Revolution will not be having fans at Gillette Stadium for their play-in round contest against the Impact. Gillette Stadium appears to not be hosting any events with fans for the foreseeable future.

The Union was the first of the Philadelphia sports teams to allow fans. Philadelphia has been allowing 2,775 people, including players and team personnel, to be in the stadium. Fans will be excited to their top-seeded Union take on the lowest-seeded winner from the play-in round.

Defending Eastern Conference champion Toronto FC will be allowing 5,000 fans for their first-round game against the higher-seeded winner from the play-in round. Pratt & Whitney Stadium at Rentschler Field will be allowing just over 13 percent capacity for the November 24 evening contest.

The Crew will be hosting the Red Bulls for the Saturday afternoon contest, and Columbus will be allowing 1,500 fans at MAPFRE Stadium. The number of fans allowed has remained consistent for Columbus, and it will continue to be at 7.5 percent of capacity.

Orlando City SC’s home stadium, which will be hosting the 2020 CONCACAF Champions League final stages, is allowing 20 percent capacity for the No. 4/No. 5 matchup on Saturday at noon. Orlando City SC will hope to have all 5,100 fans cheering loudly for the team.

Sporting KC took the top spot out of the three-time tiebreaker for first place in the Western Conference, and the team’s venue Children’s Mercy Park is hosting just over 3,300 fans for games. Sporting KC will have its stadium at 18 percent capacity for its first-round game against the Earthquakes.

The defending MLS Cup champion Sounders will not be having fans at CenturyLink Field for their first-round contest against LAFC. CenturyLink Field is expected to not have fans at games for the foreseeable future.

With the first conference finals over, the 2019 Cup MLS Playoffs are down to two; the Seattle Sounders and Toronto FC. On Tuesday the Sounders punched their tickets to the MLS Cup Final by defeating overall No.1 seed LAFC 3-1 in the Western Conference Final. They will host the Eastern Conference Champions Toronto FC, who defeated Atlanta United FC on Wednesday 2-1.

The MLS Cup Final is set for November 10th at CenturyLink Field in Seattle.

On the secondary market TicketIQ will offer fans a Low Price Guarantee on all sold out MLS Cup Final tickets in addition to Low Price Guarantees on all sold out MLS matches. That means that if you find a secondary market ticket for less on a site like StubHub or Vivid, we’ll give you 200% of the difference in ticket credit. TicketIQ customers save up to 25%.

How Much Are 2019 MLS Cup Playoff Tickets

Face value MLS Cup Final tickets in Seattle are available via Seatgeek with prices starting at $204 and going as high as $3,300 per ticket.

Below is a look at MLS Final ticket prices over the last decade: 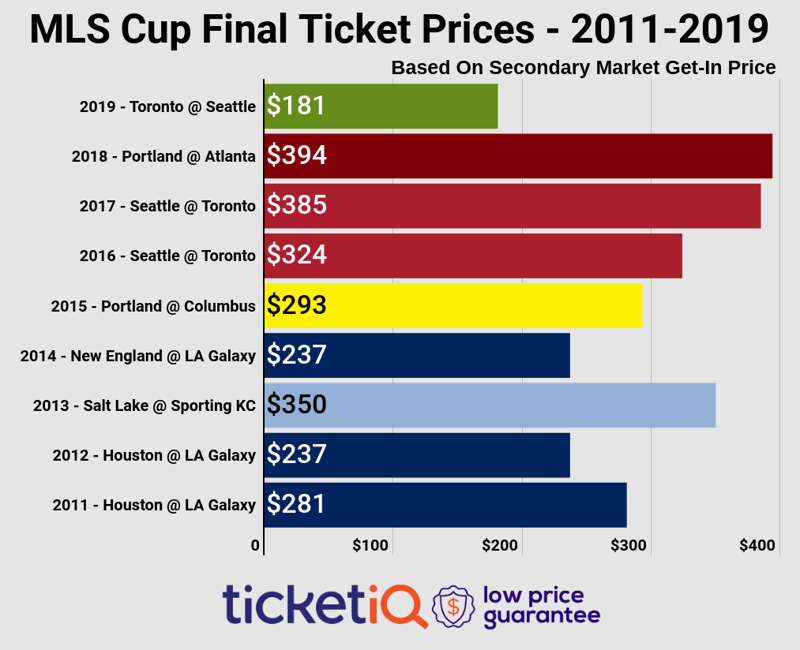 Primary market tickets through partner Ticketmaster for this game go on sale on Friday, October 25th at 3PM.

Primary market tickets start at $95 in the general admission Supporters Section. 200 level seats are almost sold out in the corners and behind the goals. There are 200-level sideline tickets available that start at $105 per seat and range up to $130. On the lower level prices start at $120 for tickets in the corners and go up to $140. Club level seating start at $475 for section C128. The most expensive seats available are in the SunTrust and AMG Field Club sections and those range from $675 to $825.

Secondary market prices for the game start at $116 for 200-level seats behind the goal. On the 200-level most seats can be had for less than $160, but for lower rows on the sidelines the price tag jumps up to $330. 100-leve seats start at $130 in section 104 in the corner and 117 behind the goal. Closer to midfield prices start at $171 and range up to $358. Club seating on the 100-level at midfield start at $150 and go up to $488. Like the primary market the most expensive tickets in the building will be found in the SunTrust and AMG Field Club sections. However, there are many more options for these tickets available on the secondary market. Prices range from $470 to $758 per ticket. 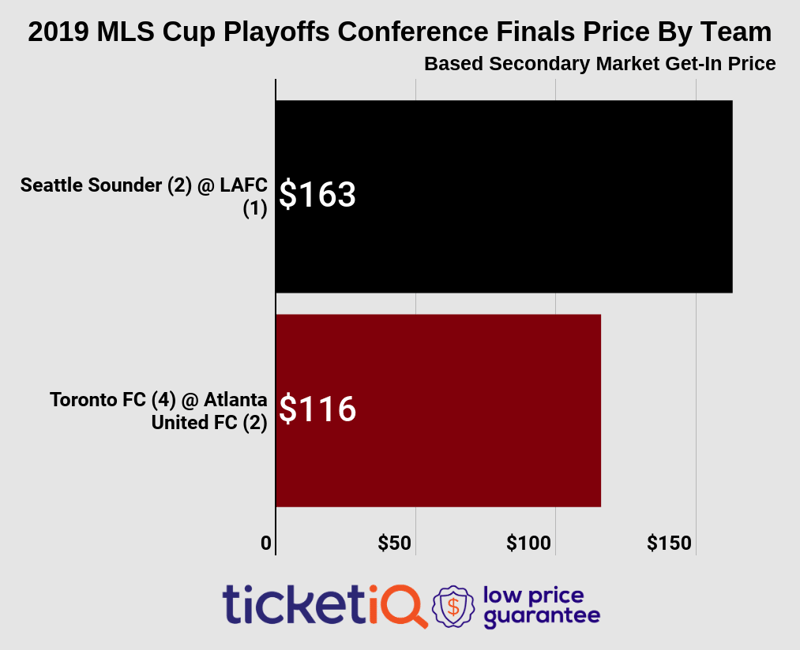 Primary market tickets through partner Ticketmaster for this game are currently sold out.

The match-up between the two Los Angeles teams is by far the most expensive game of the Conference Semifinals. The least expensive secondary market tickets are $215 for 100 level seats behind the goal. Supporters Section general admission seats start at $240. The most expensive tickets are in the Field Club section and they go as high a $1,000 per seat.

Secondary market tickets for the game start just over $40 for tickets in the 300 level in the corners and 300 level sideline seats start at $50. 100 level corner and end zone seats start in the $42-$47 range. 100 level sideline and 200 level club seats go as high as $220. The most expensive secondary market tickets are in the Pitch section, and they go up to $340.

The cheapest primary market ticket through partner Ticketmaster for this game is $48 for Standing Room Only. For standard seating, the cheapest ticket available is $74 for Section 334, Row 13. 100 level seats start at $78 for Section 131, Row 37C and range up to $335 per ticket in the first 5 rows of Sections 115, 116, and 117. The most expensive tickets available are Pitchside Seating, with prices between $470 and $795 per seat. 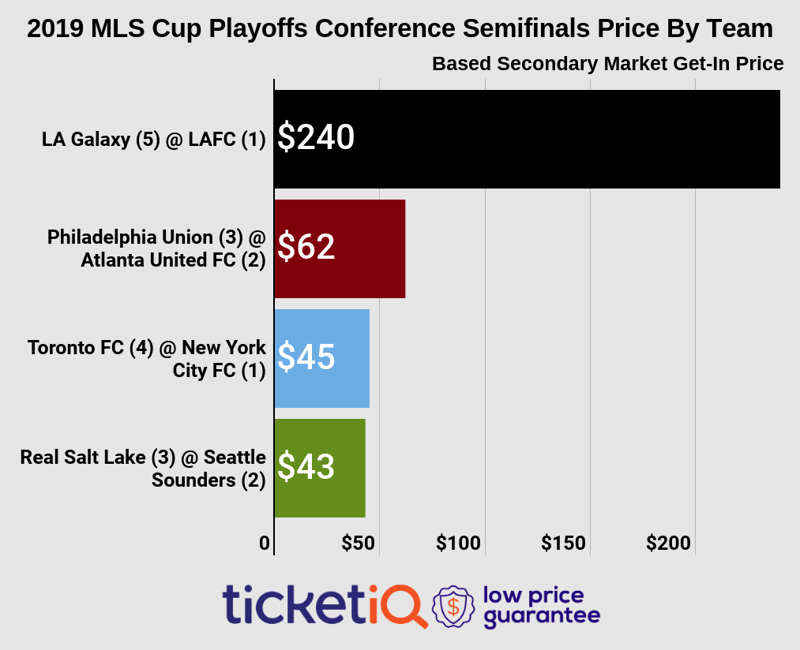 Primary market tickets via partner SeatGeek remain for this game starting at $65 in the 100 sections, though some of these are single tickets. Fans will have to spend at least $75 on the primary market to get two seats together. There are also a handful of Club Section seats available at Allianz Field starting at $280.

On the secondary market, the cheapest seats are $77 for Upper Level Section 118. On the Lower Level prices start at $117 for tickets in Section 5 behind the goal and range up to $244 for 8th row seats in Section 13 right at midfield.

Primary market tickets for this game are available in most sections of Rio Tinto Stadium, and start at $20 as compared to $38 on the secondary market. According to partner AXS, the priciest seats still remaining are at midfield in Section 19 for $500. The closest seat to the action is in Row F.

On the secondary market, ticket prices start at $25, and range as high as $59.

Primary market tickets for this game at CenturyLink Field are available starting at $33 for seats in the 300 sections, as compared to $40 for the cheapest ticket on the secondary market. On primary partner SeatGeek, $33 tickets are available in multiple 300 sections behind the nets and on the corners. On the primary market, seats along the sidelines range in price from $56-$112, for seats at midfield.

A limited number of tickets remain available on the primary market via partner Paciolan, starting at $39 on the corner in Section 112. The only seats remaining are along the sidelines and go up in price to $112 for Sections 106-108 at the midfield circle.

On the secondary market, prices start at $51 for tickets in Section 114. The most expensive tickets available for the game are $97 per seat in Section 125, Row B.

The cheapest game of all the first-round games, fans can get into Mercedes-Benz Stadium for $15 on the primary market via Ticketmaster.The cheap seats are mainly in Section 329 on the corner.

Secondary market tickets are similarly priced – the cheapest seat is $16. Fans can sit on the sidelines in the 300 Sections for as little as $25 on the primary market, or can treat themselves to Club Section seats in Sections C109, C110, C128, or C126 for between $140-$375. Seats in C128 include access to the SunTrust Lounge and seats in C110 include access to the AMG Lounge, both of which have inclusive food-and-beverage options. 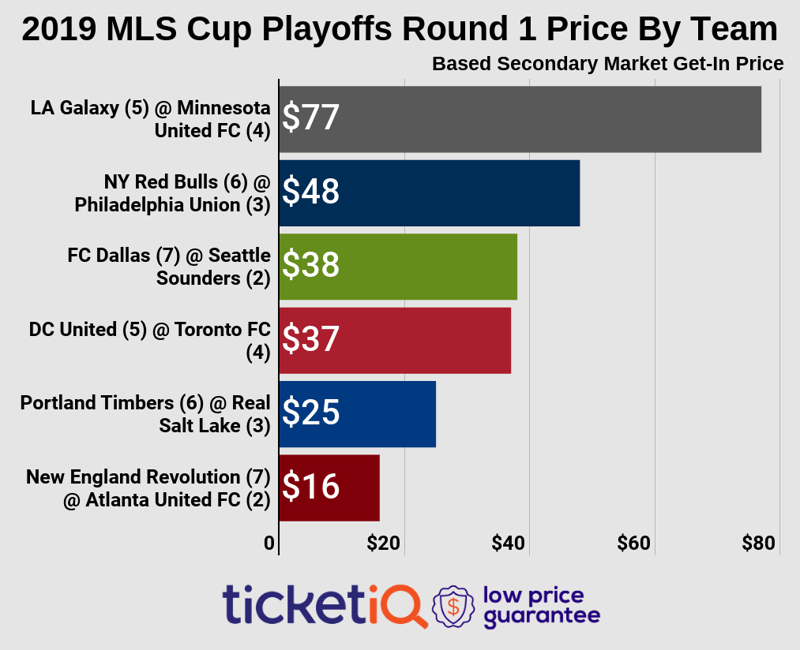 How To Find The Cheapest LAFC Tickets + Face Value Options