How To Find The Cheapest NBA All-Star Game Tickets

As of now, the current attendance plan for the 2021 NBA All-Star game is that 1,200 to 1,500 people are expected to attend, however, it will not be a ticketed event. The NBA plans to invite local health-care workers and students/staff from local HBCUs. For fans that can attend, there will be a mask requirement, contactless entry, and security screening including rapid COVID-19 testing for people sitting within 30 feet of the court.

Give us your email below for updates on NBA All-Star Game ticket pricing and availability:

If fans are permitted and tickets become available on the secondary market, TicketIQ will have NBA All-Star game tickets that are Fee-Free and come with a Refund Guarantee. We also have Fee Free NBA tickets for all games with fans allowed to attend. Our Refund Guarantee states that if an event is canceled or deem unfit for fans to attend, TicketIQ will refund ticket buyers within 15 days. That means that you can buy from TicketIQ worry-free.

Below is a chart showing which teams are currently hosting fans for 2021 regular season games:

Primary market tickets for the NBA All-Star game, set for Sunday, February 16 at Chicago’s United Center, are sold out on the primary market, but fans can buy tickets to many of the weekend’s events via NBAEvents or premium ticket packages via NBAPremium.

On the secondary market, TicketIQ offers a  Low Price Guarantee on all NBA All-Star Game & NBA All-Star Weekend tickets, which means that if you find a secondary market ticket for less on a site like StubHub or Vivid Seats we’ll give you 200% of the difference in ticket credit. TicketIQ customers save an average of 5%-20% compared to StubHub and Vivid Seats.

How Much Are 2020 NBA All-Star Game Tickets

Secondary market tickets to the NBA All-Star game have a current average asking price of $4,027, making them the priciest of the decade, when TicketIQ began tracking data. The cheapest ticket is trending at $1080. Four times in the last 10 years, the average asking price has settled at $2,000 or more, including in 2019, which is the next priciest game behind this year. Fans paid an average of $2,865 at Charlotte's Spectrum Center. The cheapest All-Star game of the decade cost fans $1,020 at New Orleans’ Smoothie King Center in 2014. 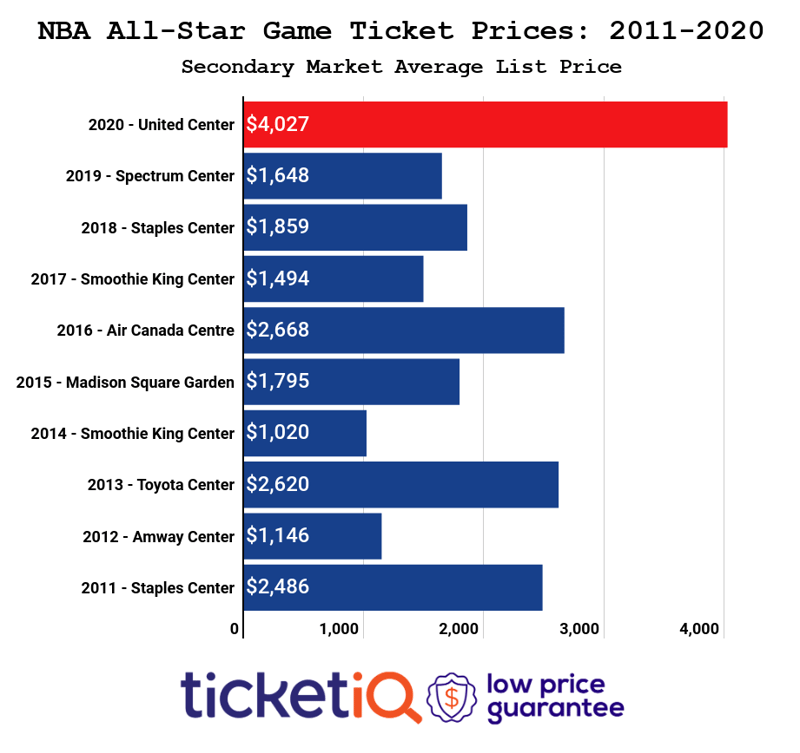 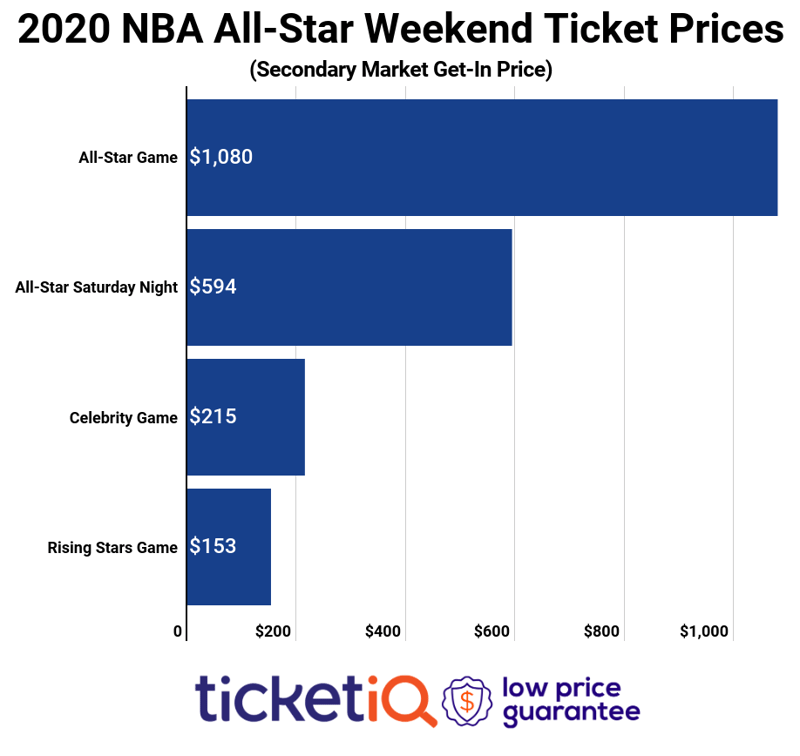 On the primary market, fans can buy a premium package that includes tickets to the Skills Challenge, Three-Point Contest, Slam Dunk Contest and the All-Star game for $2,599 via NBAPremium. The package also includes pre-game hospitality with current and former players, open bar, gourmet food stations and interactive experiences. The package does not include hotel and transportation, which can be added for an additional cost.

On the secondary market,TicketIQ shows seats available on all levels of the United Center. The cheapest seat at $1,199 is in Section 306, Row 16 on the corner. For fans wanting to be closer to the action, there are seats available in 10 floor sections, starting at $2,860 for seats in Section 106, Row 19 behind the baseline and with the TicketIQ Low Price Guarantee. The priciest floor seats still available are listed for $11,437 in Section 110, Row 4 on the sideline near the net.

There are multiple events leading up to the All-Star game. Below is a list of events and a look at ticket prices:

In a game that combines celebrity with sport, fans can watch movie and television stars, former NBA players and WNBA players in an entertaining match-up. Primary market seats for this game are sold out, but fans can shop the secondary market, where seats start at $115 in Upper 202, Row S.

This game pits the NBA’s best rookies and sophomores. Seats are available via Ticketmaster starting at $65 on the 300 Level and go up to $400 for a seat along the baseline in either Section 113 or 122. On the secondary market, seats start at $59 in Level 307 on the corner.

Format: The league selects the top players in either their first or second NBA seasons to participate in this event. Those players are split up into two teams to play in an exhibition game -- one representing the United States, the other representing the rest of the world. Each team has 10 players: four backcourt players, four frontcourt players, and two wild cards.

For an up-close look at the players, fans can buy a ticket to practice and get a glimpse of the best players in the league. Tickets are sold out on the primary market, but fans can get in via the secondary market, with tickets starting at $58 on the 200 Level.

When the NBA All-Star Game tips off February 17 in Charlotte, tickets for the game  will likely be the most expensive All-Star game this decade. A week before the game, both the average asking price and get-in prices for a ticket to Charlotte’s Spectrum Center are the highest since secondary ticket marketplace TicketIQ.com began tracking data in 2011.

After price average prices reached a high of $2,865 last week, prices have dropped significantly with the game less than a week away.  The current average price of $1,648 is the 5th most expensive we've tracked this decade. The most expensive ASG cost fans $2,668 in 2016 at Toronto’s Air Canada Centre. Two other All-Star games had average asking prices of more than $2,000 – The 2013 version at the Houston’s Toyota Center cost fans $2,620, and the 2011 edition at Los Angeles’ Staples Center settled at $2,486.

In terms of get-in price, the current $650 cost for the cheapest tickets has dropped below the most expensive game, which was $785 for the 2015 All-Star Game at New York’s Madison Square Garden. The cheapest seat of the decade cost fans $185 at New Orleans’ Smoothie King Center in 2017. While the cheapest ticket has dropped close to 30% in the last week, it's still the second-most expensive 'get-in' prices we've tracked over the last decade.

Team captains LeBron James (West) and Giannis Antetkounmpo (East) drafted their teams February 7, 10 days ahead of the game. The pair made a pair of Golden State Warriors their first picks – Kevin Durant will play on James’ team and Steph Curry will play for Antetkounmpo’s team.

Charlotte’s Kemba Walker was the eighth and final pick of the first round of the draft, and will play for Antetkounmpo’s team. Walker is the only Hornet who was selected to the All-Star Game, but several other regional stars – New Orleans’ Anthony Davis and Orlando’s Nikola Vucevic – are also on the roster.

Not surprisingly, the best represented team will be Golden State with three players, while Philadelphia, Toronto and Oklahoma City each have two.