If you’re looking for a way to spend your Christmas Day, the NBA has you covered, with five games across the country starting at noon ET with the Boston Celtics at the Toronto Raptors and the final tip-off at 10:30 p.m. featuring the New Orleans Pelicans at the Denver Nuggets.

Primary market tickets are available to all games, except the Los Angeles Clippers vs. Los Angeles Lakers game at Staples Center, which is sold out on primary partner AXS.

On the secondary market, TicketIQ has seats to all games, and offers a Low Price Guarantee on all Christmas Day games in addition to Low Price Guarantees on all sold out NBA tickets. That means that if you find a secondary market ticket for less on a site like StubHub or Vivid, we’ll give you 200% of the difference in ticket credit. TicketIQ customers save up to 25%.

How Much Are NBA Christmas Day Tickets 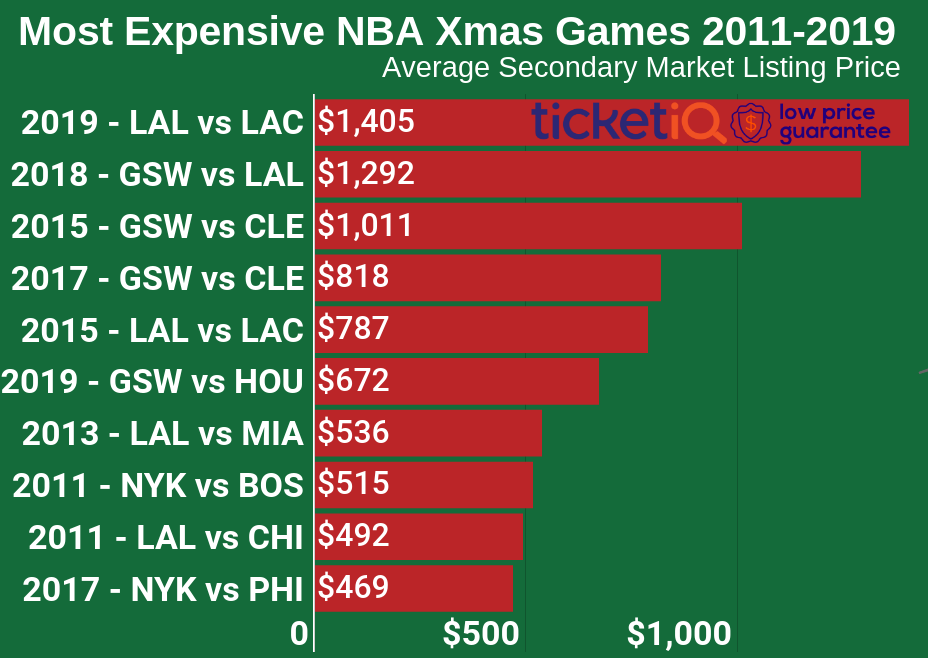 TicketIQ is committed to the cheapest tickets possible, and we make much less on sold out tickets compared to other major marketplaces like StubHub and Vivid. That means ticket buyers save from up to 25% on TicketIQ on sports, music and theater. We're able to do this because we also work with teams, venues, and other ticket owners, to help them sell tickets at face price, directly to consumers like you, through Ticketmaster and AXS. For an overview of the 2019 NBA Ticket Buying landscape, and details on the cheapest way to get tickets for every team, visit the TicketIQ Blog.

The NBA on Christmas Day has been a tradition since 1947 and this year will be no different. Missing from the lineup, however, will be the traditional NBA Finals rematch. After LeBron James left the Cleveland Cavaliers for the Los Angeles Lakers in the offseason, the league instead will feature the Lakers at the Golden State Warriors, who beat the Cavs in the Finals, as its premiere game. 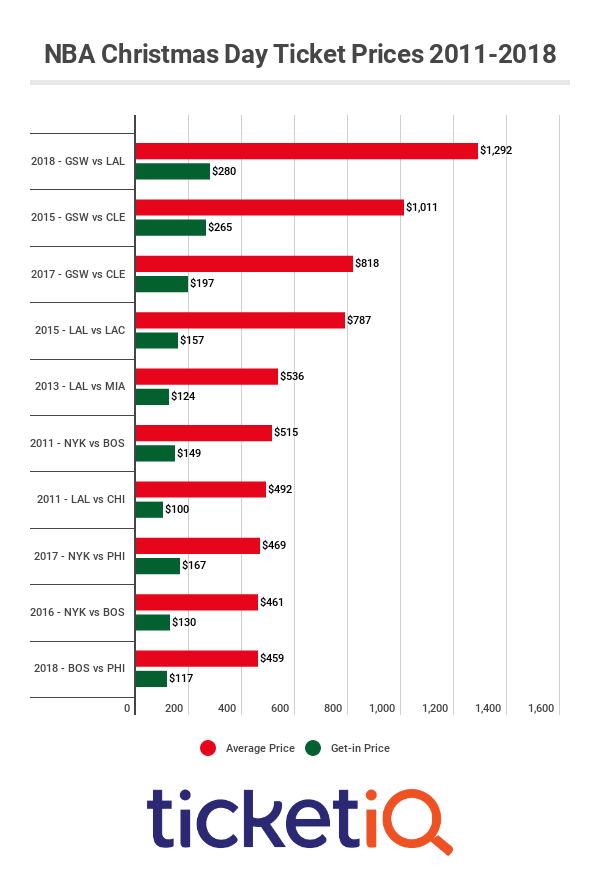 Demand for that game is sky high -- the highest in a decade of Christmas Day games, according to secondary ticket marketplace TicketIQ.com. Fans have pushed the average asking price to $1,292. The next most expensive December 25 game in history was the 2015 Warriors-Cleveland Cavaliers game, which settled at $1,011. That game was a rematch of the 2015 Finals, in which the Warriors beat the Cavs in six games. Golden State and Cleveland played in four consecutive Ginals before James headed West.

Below is a look at how all five Christmas Day are shaping up: 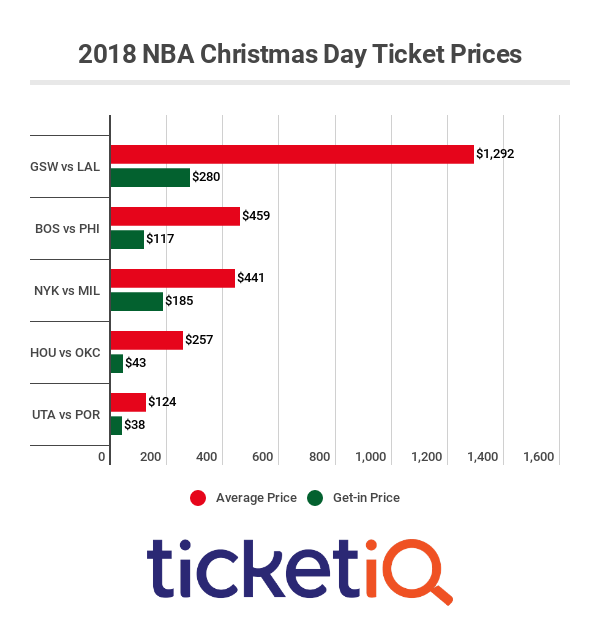 LeBron James' first game as a Laker against Golden State is driving demand for this game. It doesn't hurt that both the Warriors and Lakers are among the top four teams in the West. This game is the most expensive Christmas Day game of 2018 and of the decade, according to TicketIQ.com. Both teams played on Christmas Day last year, but neither have a winning record on December 25.

The 76ers are traditionally considered the Celtics second biggest rival behind the Lakers, and certainly their biggest rival in the East. This year, games between the two will have added value because both the Celtics and the 76ers are among the top-tier teams in the East. The rivalry dates to 1949 and includes an NBA-record 21 playoff meetings. This game has the second highest average asking price for a Christmas Day game on the secondary market, according to TicketIQ.com, and is the priciest of two (2018, 2017) played at TD Garden. Last year’s Christmas Day game had a final average asking price of $194.

The Thunder and Rockets have met regularly since 1969, albeit under other franchise names -- the Thunder were previously the Seattle SuperSonics and the Rockets franchise started in San Diego. The rivalry is very evenly matched, though the Thunder hold a 110-107 all-time series advantage. The Thunder have one of the worst Christmas Day records in the NBA at 5-13, but did beat the Rockets last year. This game is a rematch of 2017 December 25 game, and is the second of four meetings between the teams this season. At $257, this is the second cheapest Christmas Day game of 2018.

Neither of these teams has been a Christmas Day regular, but both have winning records on this date. The Trail Blazers (14-3) have the second best Christmas Day record in the NBA, behind only the Miami Heat (10-2). Portland's last appearance on December 25 was in 2010 and Utah's was in 1997. This game will be the second of four meetings between these teams this season, and has the lowest average asking price across this year's Christmas Day games.

Want to be in the house when an NBA game tips off on Christmas Day? Be prepared to pay the highest price since 2011, when the cost of an average NBA ticket to a Christmas Day game was $403.94. 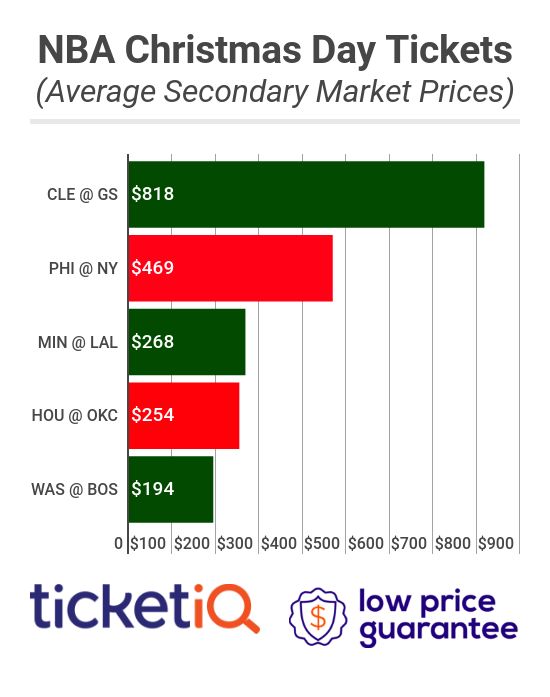 How much more? At least $100. As of Dec. 19, according to TicketIQ.com data, the average asking price for the five Christmas games was $503.55. Of course, that number is heavily skewed by the much-anticipated NBA Finals rematch between the defending champion Golden State Warriors and the Cleveland Cavaliers. That game, which will be played in Oakland, currently has a secondary market asking price of $818, making it the second most expensive Christmas Day game since TicketIQ.com started tracking data. The most expensive Christmas game in history was the 2015 Cavaliers at Warriors matchup, which ran an average of $1,010.81. The third priciest ticket cost $786.68 when the Clippers played the Lakers also in 2015.

After the Cavaliers-Warriors game this year, the next most expensive ticket is the rivalry game between the Philadelphia 76ers and New York Knicks at Madison Square Garden, which has a current asking price of $468.92. The cost of a ticket to the remaining three Christmas games are: $268.39 for the Timberwolves at the Lakers; $253.75 for the Western Conference-leading Rockets at the Thunder; and $193.62 for the Wizards at the Eastern Conference-leading Boston Celtics.

For the seven years that TicketIQ.com has been tracking data, the only venue that has hosted a game every season is Staples Center, home to both the Lakers and Clippers. Madison Square Garden has hosted five Christmas Day games, including consecutive games in 2016-2017 and 2013-2015. Only the Thunder has played on every Christmas Day since 2011, while the Lakers, Clippers and Golden State Warriors have played six of the last seven years.

No matter what game you want to try to see, TicketIQ.com is your place to buy tickets. Among TicketIQ.com’s Low Price Guarantee listings, fans can snag tickets to the Cavaliers-Warriors game for $221 for seats in Section 223 near the top of the arena or for $4,084 for a floor-level seat in Section 14 near center court.