American boy band New Kids on the Block will co-headline the "Mixtape" tour with Salt-n-Pepa, Naughty by Nature, Tiffany and Debbie Gibson. The tour started at US Bank Arena on May 2 and runs through July 14 in Sunrise, Florida. The band will make two stops each Rosemont, Illinois (June 13-14), Boston (June 28-29) and the New York City area (June 30 and July 2).

The most popular venues are up to 95% sold out on the primary market, and most available seats are on the corners toward the back of the stage. Comparatively, there's a bigger selection with seats in front of the stage available on the secondary market, meaning fans should shop around.

TicketIQ has Low Price Guarantees on New Kids On The Block tickets for every stop on the Mixtape Tour, in addition to Low Price Guarantees on all concert tickets, which means that if you find a secondary market ticket for less on a site like Stubhub or Seatgeek, we'll give you 200% of the difference in ticket credit. TicketIQ customers save an average of 5%-20% compared to Stubhub and Seatgeek.  You can also download the TicketIQ app for $20 off your first ticket purchase 📲 🎟️ 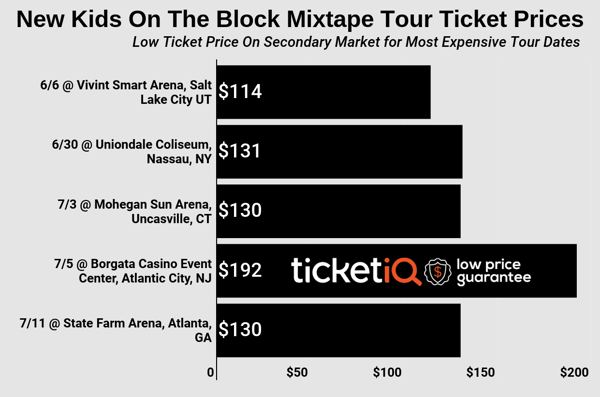 The two Boston shows, June 28-29, are nearly sold out. Limited balcony seats are available starting at $74.95 through primary vendor AXS, as compared to $108 on the secondary market, with a bigger selection.

One of the cheaper shows, the July 9 Charlotte, North Carolina tour date shows it's worth comparison shopping -- balcony seats start at $59.95 on the primary market, versus $39 on the secondary market, both for Section 203.

Below is a look at some of the higher-interest shows remaining:

New Kids on the Block announced The Total Package tour with Boyz II Men and Paula Abdul on the Today show last week. The tour will launch on May 12 at the Schottenstein Center in Columbus, Ohio, and will extend until July 16 at Hard Rock Live in Hollywood, Florida.

Tickets for the tour went on sale November 19 via Ticketmaster. Already, the resale market is flooded with tickets to see New Kids on The Block this summer. For all of the scheduled dates, tickets are averaging $182, with the most expensive show slated to be the band's Long Island stop on July 7. Tickets for that date are averaging a lofty $394.

NKOTB broke up in 1994 and then reunited in 2007. The band toured in 2013 with Boyz II Men and 98 Degrees. Their upcoming tour will mark Paula Abdul's first tour in 25 years. Combined, the three acts have sold 200 million records worldwide, and Boyz II Men remain the best-selling R&B group of all time.

New Kids On The Block have set the road ablaze over the last two months, bringing their “Main Event” Tour to more than 30 cities since the beginning of May. The pop icons have found success with fellow touring partners Nelly and TLC and have 12 shows remaining through July 2. Over that time, the average price for New Kids On The Block tickets is $108.50 on the secondary market.

The band makes its most expensive stop on June 30 at Bell Centre in Montreal. That show currently owns a secondary ticket average of $215.06 and the cheapest available ticket is $36. No other shows will come remotely close to that average ticket price, with the second top-priced gig at Air Canada Centre on June 28 currently averaging at $124.61.

Consult the band’s average setlist on the Main Event Tour below, via setlist.fm:

(UPDATE 6/11/15) The pop superstorm known as the “Main Event” Tour continues in the Northeast this week with shows in Pennsylvania and Connecticut through the weekend. New Kids On The Block, TLC and Nelly have bonded together for one of the biggest tours of the summer, and the trio is still seeing a considerable demand for tickets on the secondary market. According to TicketIQ, the average secondary price for New Kids On The Block tickets over the tour’s remaining 18 shows is $117.64.

The most expensive show comes on June 17 at Quicken Loans Arena in Cleveland. That show currently owns a secondary ticket average of $329.89 and the get-in price, or cheapest available ticket, is $29. On June 30, the pop band hits Bell Centre in Montreal, where tickets own a secondary average of $197.53 and the get-in price starts at $36. Other top-priced shows will be held on June 28 at Air Canada Centre in Toronto ($151.23/avg.) and June 22 at Madison Square Garden in New York City ($143.60/avg.).

Hersheypark Stadium in Pennsylvania will play host to the tour’s cheapest gig on June 27. Tickets to the show currently average at $87.03 and the get-in price is $33. The show will be a part of the Mixtape Festival, which also features performances from Sugar Ray, Vanilla Ice and Salt-N-Pepa. The cheapest solo date NKOTB will play TLC and Nelly will be on June 19 at Wells Fargo Center in Philadelphia. That show owns a secondary ticket average of $92.47 and the get-in price is $19.

The “Main Event” Tour continues in the U.S. and Canada through July 2, when it concludes at First Niagara Center in Buffalo, New York.

(UPDATE 5/27/15) ‘The Main Event’ Tour is in full swing, and touring partners New Kids on the Block, TLC and Nelly are eliciting a demand for tickets on the secondary market. Once the biggest boy band in music, NKOTB is still filling the seats more than three decades after forming. The quintet will tour across North America through the end of July and the average secondary price for tickets over the 29 remaining shows is $129.34.

The tour’s most expensive stop will be at the Amway Center in Orlando on June 5. The average price for New Kids on the Block tickets to the Florida-based show is currently $236.77 and get-in price is $44 on the secondary market. Two other shows average above $200 – June 30 at Bell Centre in Montreal ($234.33) and June 2 at Time Warner Cable Arena in Charlotte ($209.41). Get-in price for those shows starts at $42 and $53, respectively.

On the opposite side of the financial spectrum, the tour’s cheapest show will be on June 7 at KFC Yum! Center in Louisville. The Kentucky gig currently owns a secondary ticket average of $87.61 and the cheapest ticket is listed for $32. A May 29 stop at Palace of Auburn Hills in Detroit is the second and final show that averages below $100, with median ticket price currently set at $92.10 and get-in price starting at just $14.

The ‘Main Event’ Tour continues through July 26, when it wraps at Delaware State Fairgrounds.

(UPDATE 5/13/15) Teen heartthrobs New Kids On The Block kicked off his massive “The Main Event” Tour with Nelly and TLC earlier this month. The pop group is scheduled to make 39 more stops through the end of July, and the trio of pop music’s generational stars is garnering big ticket demand on the secondary market.

According to TicketIQ, the average secondary price for New Kids On The Block tickets is $143.40 over its two-month of remaining tour dates. The band will play its most expensive show in its native Boston at the TD Garden on June 24. That show currently owns a secondary ticket average of $279.06 and the get-in price starts at $74.30. Two other shows average above $200; June 5 at Orlando’s Amway Center ($213.58) and June 30 at the Bell Centre in Montreal ($206.45).

The cheapest show of tour will be held on May 15 at the Smoothie King Center in New Orleans, where tickets own a median price of $72.98 and get-in price is listed for $32. Stops at the Sprint Center, Allstate Arena and American Airlines Center in May also average below $100 on the secondary market. The May 19 show in Kansas City owns a $86.39 ticket average while the Chicago stop sees a $88.19 average and the Dallas stop averages at $95.72.

New Kids on the Block, TLC and Nelly Tickets for “The Main Event” Tour Averaging Over $150 on Secondary Market

The tour, being called “The Main Event”, kicks off at the Mandalay Bay Events Center in Las Vegas on Friday and will wind around the continent through July 2, when it wraps at the First Niagara Center in Buffalo. The most expensive date of the tour will be on June 30 at the Bell Centre in Montreal, where tickets average at $213.01 and the get-in price starts at $50.

May 8 will welcome the cheapest show of tour at the SAP Center in San Jose, where tickets own a secondary average of $84.89, 44.4% below tour average, and low price starts at $35. The NorCal show will be the only show on tour that averages below $100 on the secondary market.

(1/23/15) It may only be mid-January but we already have a contender for most random package tour of the year following the news that New Kids On The Block, TLC and Nelly are to join forces for a North American trek dubbed The Main Event.

The unlikely touring buddies will kick off their run of summer shows at Las Vegas’ Mandalay Bay Events Center on May 1 – tickets for which are available on TicketIQ at a get-in price of $117 – and will take in a further 40 performances before wrapping up at Buffalo’s First Niagara Center on July 2 ($127).

No strangers to the concept of the joint tour, New Kids On The Block have shared the stage with the likes of Backstreet Boys, 98 Degrees and Boyz II Men since their 2008 reunion, but this latest match-up is easily their most intriguing to date.

TLC, who recently launched a Kickstarter campaign to fund their fifth album, have played a number of one-off shows since the death of founding member Lisa ‘Left Eye’ Lopes, but this will be their first major tour since their Fanmail trek back in 2000.

Nelly, who will soon appear on the big screen in Jennifer Lynch’s mystery thriller A Fall From Grace, will also make his return to the US live scene after completing his current Australian tour with fellow rapper Lupe Fiasco.

There are still plenty of tickets on offer at TicketIQ for most dates with the June 16 show at Columbus’ Nationwide Arena currently with the lowest get-in price at $79 and the June 21 gig at New York’s Madison Square Garden with the highest at $370.

Fans should expect to hear the majority of the eleven US number ones the three acts have amassed between them including “I’ll Be Loving You (Forever),” “Hangin’ Tough” and “Step By Step” (NKOTB), “Creep,” “Waterfalls” and “No Scrubs” (TLC) and “Hot In Herre,” “Dilemma” and “Shake Your Tailfeather” (Nelly).