Primary market face-value tickets generally go on sale shortly after the NFL schedule is released. This year, the schedule is being released on Thursday, May 12th. When they do go on sale they will be available via Seatgeek.

On the secondary market, TicketIQ has Fee-Free New Orleans Saints tickets which also include a Refund Guarantee. Our Refund Guarantee states that if an event is canceled or deemed unfit for fans to attend, TicketIQ will refund ticket buyers in as soon as 15 days. That means that you can buy from TicketIQ worry-free. Customers on TicketIQ save between 15%-25% compared to other secondary market ticketing sites.

New Orleans Saints season tickets are sold out, but fans can join the waiting list.

The Saints and the Mercedes-Benz Superdome offer Club Lounges on the 200 Level. The concourse has carpeted floors, tiles and custom murals and wood ceilings, setting it apart from the standard stadium concourse. Four Clubs are located on this level, and fans will get premium food-and-beverage options, prepared by chefs as ordered. The Clubs also have extensive audio-visual options, and gigantic reinforced glass windows offering a panoramic view of New Orleans.

The lounges and concourse are outfitted with flat-screen televisions, ensuring that fans won’t miss any of the action. There are club chairs, bar-style seating, and modern lighting throughout the Clubs. Access to the Club Concourse is currently through the interior of the Superdome, but there are plans to add exterior access, so Club ticket holders will have dedicated entrances.

The New Orleans Saints app is available to download for Android, Apple and Windows devices. Fans can buy, sell or transfer tickets on the app or use it for digital ticketing to enter the stadium. Digital ticketing is available for both single-game and season-ticket holders.

How Much Are 2021 New Orleans Saints Tickets

The Saints will operate at full capacity for the 2021 NFL season, however it was recently announced that fans attending  games will be required to show proof of vaccination or a negative COVID-19 PCR from the previous 72 hours. Fans will also be required to wear masks inside the venue when they aren't eating or drinking.

Face coverings will be mandatory for all fans and staff, and must be worn at all times (other than while actively eating or drinking). Failure to comply with this policy will result in ejection from the stadium. Be a good teammate – because wearing a face covering not only helps to protect you, it helps protect other fans, our team and our staff.

Please maintain physical distancing at least 6 feet while on Superdome property; including the parking lot, at the entry gates and as you move around the Mercedes-Benz Superdome. When exiting your seats for concessions, restrooms or following the game, please wait for aisles to clear to avoid congestion.

Your ticketholder party will be seated together in a "pod" of adjacent seats. Your pod will be separated from other groups by approximately six (6) feet. Please do not sit in any seat other than the one you've been assigned in order to help us maintain pod integrity. Also, please remember to maintain social distancing and do not visit other guests in their seating pod.

Social distancing will be enforced in high traffic areas, including:

The below updates have been made to the concession areas in the Mercedes-Benz Superdome:

The New Orleans Saints app is available to download for Android, Apple and Windows devices. Fans can buy, sell or transfer tickets on the app or use it for digital ticketing to enter the stadium. Digital ticketing is available for both single-game and season-ticket holders.

How Much Are 2020 Saints Tickets

With a 75% increase in average asking price on the secondary market over 2019 due to lack of inventory on the secondary market, the price to get into a New Orleans Saints home game ranks No. 8 across the NFL. The average asking price is $479, well above the league-wide average of $390. The Saints have won the NFC South for three consecutive seasons, and many pundits are predicting another 12-win season.

How Much Are 2019 Saints Tickets

Six months after a heart-breaking and controversial loss to the Los Angeles Rams in the NFC Championship, the New Orleans Saints will dive into two rivalry games in the first two home dates of the season. The September 29 game against the Dallas Cowboys is trending as the priciest game of the season on the secondary market, and the average asking price for 2019 is currently the highest this decade, and 10th highest across the NFL. The average asking price of $274 is up from $215 in 2018, the second consecutive season the Saints won the NFC South. The highest average in the NFL is $777 for a New England Patriots home game. 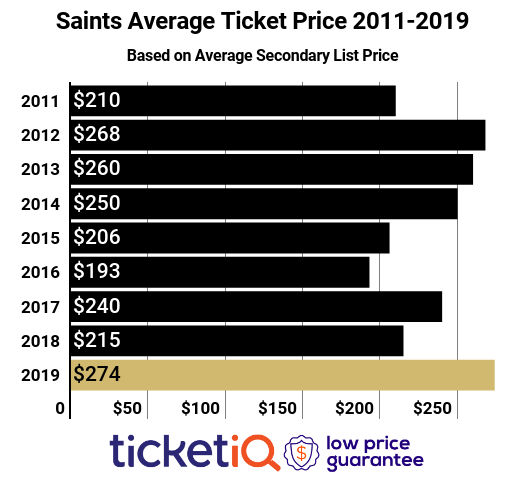 The New Orleans Saints open the season at home Sunday against the Tampa Bay Buccaneers in a game that will be one of the cheapest of the season. Below is how Saints tickets prices stack up on the secondary market across the league. As you can see below, 2018 New Orleans Saints tickets are down 10% compared to last season, and are the fifth most expensive since 2011, when secondary ticket marketplace TicketIQ.com began tracking data. The most expensive ticket of the decade was in 2012, a year after the Saints won the NFC South with a 13-3 record and two years after they won the franchise’s first and only Super Bowl. New Orleans won the South again last season with an 11-5 record. 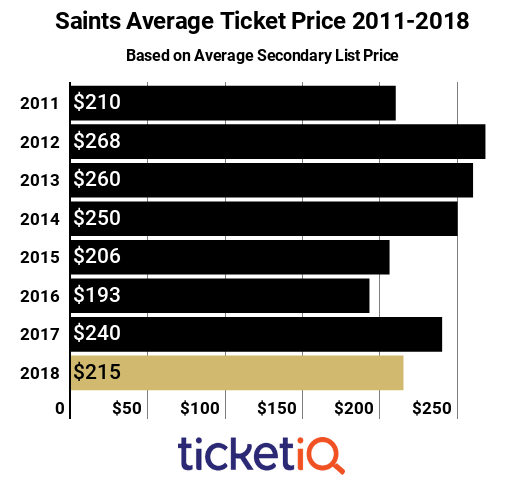 Where to Buy Saints Tickets

With the drop in ticket prices, Saints tickets are the 16th most expensive this season in the NFL. Veteran quarterback Drew Brees is working on his 17th season and, at 39 is hoping to follow in Tom Brady’s footsteps and play into his 40s. There is a waiting list of 100,000 people for Saints season tickets, and fans can join the waitlist here. “Verified resale” single-game tickets are available through the NFL Ticket Exchange on Ticketmaster, but some sections are already sold out for the biggest games, including the November 18 vs. the Philadelphia Eagles. Also on the secondary market, a large selection of seats are available through secondary ticket marketplace TicketIQ.com, with the company’s Low Price Guarantee.

Prices For Each Game on 2018 Saints Schedule

It’s no surprise that when the defending Super Bowl champions come to town, a seat in the SuperDome will be tough – and expensive – to come by. The current average asking price on the secondary market is $364, making it one of two games with average prices above $300. The December 23 Pittsburgh Steelers game has an average asking price of $315. The Eagles and the Saints don’t have a rivalry per se, but both teams have been in the post-season mix of late. They last met in 2015, when the Eagles won a regular-season game. Philadelphia holds a 17-13 series advantage. With the Saints coming off an 11-5 season, and the Eagles as defending Super Bowl champs, prices for this game have the potential to rise. 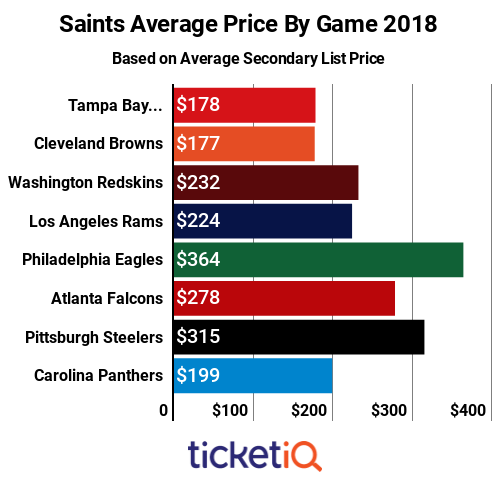 How To Find The Cheapest New Orleans Saints Playoff Tickets

How To Find The Cheapest Saints Vs. Panthers Tickets