› Pentatonix  › How To Find The Cheapest Pentatonix: The World Tour Tickets

How To Find The Cheapest Pentatonix: The World Tour Tickets

A cappella group Pentatonix will continues its "Pentatonix: The World Tour," North American leg on June 15 in Grand Rapids, Michigan, and wrap up August 31 in Bethel, New York. The band, known for its covers of modern pop music and Christmas songs, will perform at medium-sized venues across the U.S. and during a three-city stop in Canada, June 28-July 2. The tour started in May in Oakland and the band will do a series of shows in Latin America in October.

Where To Buy Pentatonix Tickets

Tickets for the higher-interest shows are at least 80 percent sold out on the primary market, but secondary ticket marketplace TicketIQ has seats available at all shows. In most cases, secondary market tickets are available for $50 or less, though seven shows will cost fans a minimum of $51 on the secondary market.

TicketIQ also has a Low Price Guarantee on Pentatonix tickets for every stop on their 2019 Tour, in addition to Low Price Guarantees on all concert tickets, which means that if you find a secondary market ticket for less on a site like Stubhub or Seatgeek, we’ll give you 200% of the difference in ticket credit. TicketIQ customers save an average of 5%-20% compared to Stubhub and Seatgeek. Download the TicketIQ app for $20 off your first ticket purchase 📲 🎟️

How Much Are Pentatonix Tickets 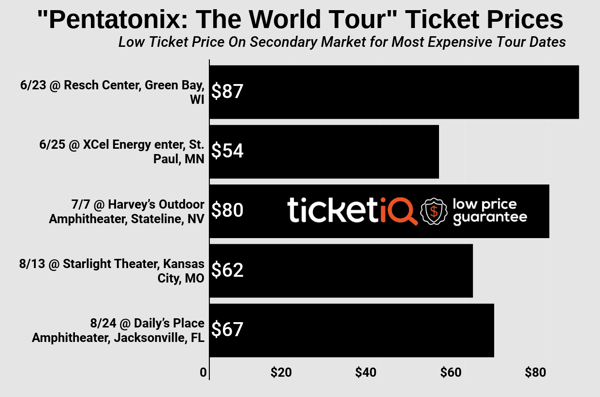 The August 24 show in Jacksonville is 85% sold out on the primary market, and sold out in the orchestra section. But on the secondary market, seats in Orchestra 03 are available starting at $355.

Below is a look at the higher-interest shows, with secondary market get-in prices of $50 or more:

Top Indie and Alternative Concert Tickets of the Week (3/23)

Top Concert Tickets Of The Week (3/9)