Located at 1260 Avenue of the Americas in Rockefeller Center in New York City, Radio City Music Hall is the iconic home of the Christmas spectacular as well as one of the most in-demand music venues in New York City.

Opened in 1932, the Art Deco-style theater seats 5,960 on three levels. Besides the Rockettes, the theater hosts asome of the biggest concerts and comedy events throughout the year.

Radio City Music Hall seating chart is broken into five distinct levels. On the floor of the theater, seating is available in the small Pit Level in front of the stage, as well as in the main Orchestra Level. There are three tiered Mezzanine Levels where fans can get an elevated view of the show. Ticketmaster is the official ticketing partner for Radio City Music Hall, and has unsold tickets available for most shows, while TicketIQ has Low Price Guarantees for all sold out tickets and shows at Radio City. That means that if you find a secondary market ticket for less on a site like Stubhub or Vivid Seats, we’ll give you 200% of the difference in ticket credit. TicketIQ customers save up to 25%.

Pit Seating and Rows at Radio City Music Hall: The Pit section at Radio City contains rows AAA, BBB and CCC.  In total there are about 150 pit seats available for any show for. Despite the high face price, these ticket often sell out through Ticketmaster, which means that the secondary market is the best way to get tickets in the Pit.

Orchestra Seating and Rows at Radio City Music Hall: Orchestra seats are the most desirable and expensive at Radio City Music Hall and Rows range from the 1st row AA to the last row which is either row U or W depending on which section of the orchestra you're looking at.  For many shows, the first 8-10 rows are listed as premium or 'official platinum', which means they'll be more expensive compared to the rows right behind them. Additionally, row N-Z (in section 400 of the orchestra) are obstructed by the soundboard for most shows, however, for the Christmas Spectacular, the soundboard is in the Mezzanine level.

Visit our dedicated blog post for a detailed buying guide for the Radio City Christmas Spectacular. 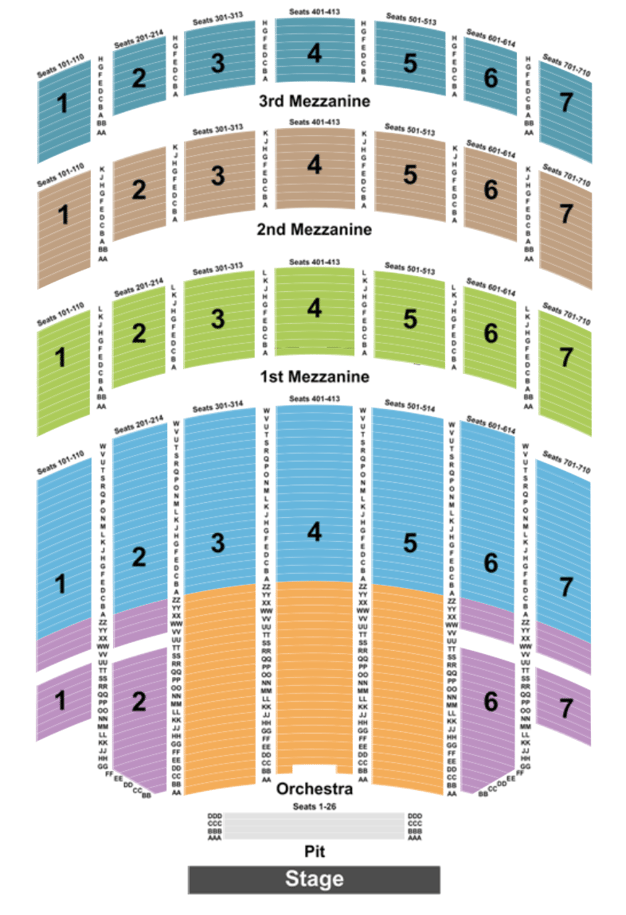 The Best Seats at Radio City Music Hall:
The best seats at Radio City depend on which event you’re attending. If you’re going to see a show with a big stage production likE the Christmas Spectacular, it's better to avoid the first 13 rows (AA-LL), and focus on tickets in rows MM to ZZ. The first half of the mezzanine level, through row D or E, also provides a great vantage point for any show.

For music fans, looking for the best sound, the pit and orchestra seats are the best options, as the the sound can get a little bit dispersed in the mezzanine level.

HOW TO GET THE CHEAPEST RADIO CITY MUSIC HALL TICKETS

Given the volume and variety of events at Radio City Music hall, it's important to check both the primary and secondary market.  Ticketmaster is the official ticketing partner for Radio City Music Hall, and has tickets available for most shows. For sold out events and tickets, TicketIQ offers Low Price Guarantees for any event at Radio City Music Hall. That means that if you find a secondary market ticket for less on a site like Stubhub or Vivid Seats, we’ll give you 200% of the difference in ticket credit. TicketIQ customers save up to 25%.

Radio City Music Hall is wheelchair accessible through its entrance at the corner of 50th Street and Avenue of the Americas. There is an automatic door opener located on the far left wall. Accessible seating is available in every level and the building is equipped with multiple elevators. Rest rooms and concessions are located in the Grand Lounge, which is accessible by elevator. There are also wheelchair accessible rest rooms on the Mezzanine level. Assistive listening devices are also available upon request, and Radio City Music Hall does present interpreted events.

How To Find The Cheapest Lions Vs. Cowboys Tickets + Face Value Options