by TicketIQ
Taking a three-month break from its Las Vegas House of Blues residency, Santana headlines a tour with the Doobie Brothers beginning June 20 in Irvine, California. The summer tour wraps on August 25 at Wantagh, New York.
The higher-interest shows are 85% or more sold out on the primary market, with several sellouts. Most other shows are 50% or less sold out, but secondary market tickets are available for all shows, meaning that fans are wise to shop around.
TicketIQ can help with secondary market tickets at all venues, and offers a Low Price Guarantee, meaning that if you find a secondary market ticket for less on a site like Stubhub or Seatgeek, we'll give you 200% of the difference in ticket credit. 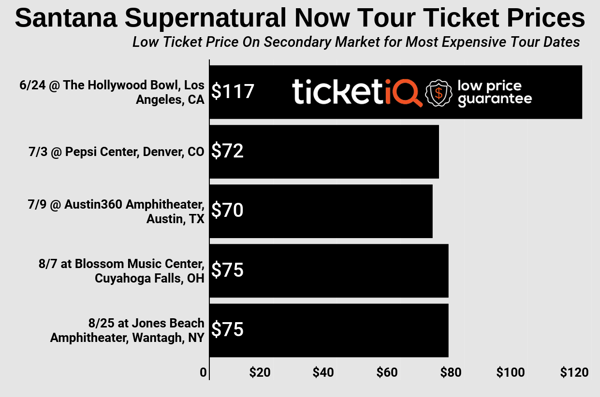 On Ticketmaster, there are less than 50 seats available on the primary market for the June 24 show at the Hollywood Bowl, and the June 29 Auburn, Washington, and July 3 Denver shows are sold out.
For the July 3 show, secondary market tickets are available in the lower bowl starting at $73 and on the Club level starting at $67.
Among the best deals is seeing Santana on August 21 at Hartford, Connecticut, where secondary market tickets start at $24 for a spot on the lawn, and the get-in price on the primary market is $43.50, again showing that savvy consumers will shop around.
Via Ticketmaster there are also a handful of different VIP packages available. Those include the Santana Front Row VIP Package, the Santana Gold Hot Seat VIP Package, the Santana Silver Hot Seat VIP Package, the Doobie Brothers Meet & Greet Package and the Doobie Brothers Hot Seat Package. You can find more details on all of those here.
Below is a look at the higher-interest shows with get-in prices starting at $65.

Previewing The Average Santana Setlist During His 2015 Las Vegas Residency

Legendary guitarist Carlos Santana has returned to Las Vegas for the next leg of his Greatest Hits residency at Mandalay Bay Events Center, which continues over eight more shows through November 15. Drawing from his seminal and exhaustive catalogue of music, Santana will play his countless hits while also covering several songs from his influences and contemporaries.

Santana’s short stay in Sin City is running in support of Corazon, the band’s twenty –second studio album that was released in May of 2014. The “An Intimate Evening with Santana: Greatest Hits Live” Tour has run in several intermittent legs since 2012, though the current fall dates are the last scheduled to date.

Check out Santana’s typical setlist during their 2015 Las Vegas residency below, per setlist.fm:

One of the world’s greatest ever guitarists, Carlos Santana, will head back out onto the road next year following the release of tour dates for a second leg of his Corazon world tour.

The 67-year-old, who last month published his memoir, The Universal Tone: Bringing My Story to Light, will first resume his residency in Las Vegas with a string of January shows at the Mandalay Bay Hotel’s House of Blues.

But after taking a month’s break, the Latin rock legend will then return to touring in support of his 22nd studio effort which, thanks to collaborations with the likes of Gloria Estefan, Ziggy Marley and Miguel, peaked at No.9 on the Billboard 200 back in May.

St. Petersburg’s Mahaffey Theatre is the first venue that will welcome the ten-time Grammy winner during his latest trek on March 8, before he moves onto the likes of Nashville’s Ryman Auditorium on Mar 11, Birmingham’s BJCC Concert Hall on Mar 15 and the Verizon Theatre at Grand Prairie on Mar 18, eventually wrapping up Stateside at Corpus Christi’s Selena Auditorium on Mar 19.

Santana will then play three dates in Mexico and a further eight Vegas shows before travelling across the Atlantic for a European jaunt which takes in France’s Nimes Festival and Les Deferlantes Festival as well as headline shows in Germany, Poland, Luxembourg, Belgium, Netherlands, Austria and Italy.

Fans with tickets for the first leg of the Corazon world tour were treated to performances of his number one singles “Maria, Maria” and “Smooth,” his early hits “Soul Sacrifice,” “Oye Como Va” and “Europa (Earth’s Cry, Heaven’s Smile)”, and his covers of The Jimi Hendrix Experience’s “If 6 Was 9” and Babatunde Olatunji’s “Jin-Go-Lo-Ba,” as well as material from his new LP.

Santana tickets for these new dates are expected to go on sale later this week, but in the meantime, TicketIQ still has Santana tickets on offer for a number of his Vegas residency shows.

Fresh from picking up the prestigious Kennedy Center Honors Award earlier this month, one of the world’s most popular virtuoso guitarists has released Carlos Santana tickets for a string of live dates across the first half of 2014.

The ten-time Grammy winner will first take to the stage on January 22 to continue his An Intimate Evening With Santana: Greatest Hits Live residency at Las Vegas’ House of Blues at Mandalay Bay. Carlos Santana tickets are available for all eight confirmed shows with the Jan 25 gig currently the lowest get-in price at $150 (average price $255) and the Jan 30 performance the cheapest average price at $220 (get-in price $153).

Following a set at the Dubai International Jazz Festival on February 20 and four South African dates, the 66-year-old will then return to the States for a handful of concerts in the spring including Nashville’s Ryman Auditorium on April 23 ($163/$287) the Saint Augustine Amphitheatre on Apr 27 ($182/$408) and Hollywood’s Hard Rock Live on May 2 before wrapping up at San Juan’s Coliseo de Puerto Rico on May 3.

Fans with Carlos Santana tickets for his recent Vegas shows have been treated to a string of his 70s hits (“Soul Sacrifice,” “Jingo,” “Black Magic Woman”), his cover versions of The Zombie’s “She’s Not There” and Tito Puente’s “Oye Como Va” and the number one hits from 1999’s career revival Supernatural (“Maria Maria,” “Smooth”), alongside the singles “La Flaca” and “Saideira,” both of which are taken from from his forthcoming superstar-packed album, Corazon.