After a Game 5 Win in Boston, The St. Louis Blues are One Game Away from their first Stanley Cup Title in Team History. Prices for a potential clinching game at Enterprise Center have doubled since the the Game 5 win, as the below chart shows. TicketIQ has Low Price Guarantees on Stanley Cup Tickets, which means that if you find a secondary market ticket for less on a site like Stubhub or Seatgeek, we'll give you 200% of the difference in ticket credit. TicketIQ customers save an average of 5%-20%. 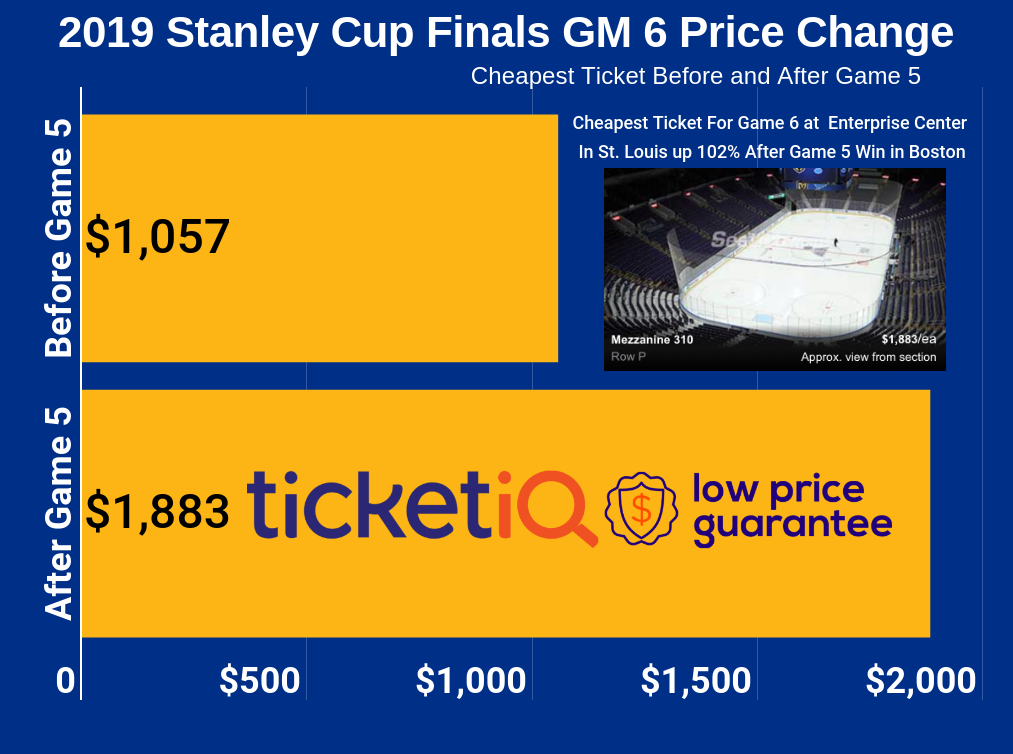 With their game six victory of the San Jose Sharks, the St. Louis Blues have advanced to their first Stanley Cup Final since 1970, their fourth year of existence when they played home games at St. Louis Arena. For Blues fans looking to get their first taste of a Stanley Cup in a couple generations, ticket prices on the secondary market for Game 6 on June 9th will run fans around $1100 after fees. Based on the cheapest ticket available across the series, Blues Tickets are the 3rd most expensive price that we've tracked this decade. While primary market tickets are sold out nevertheless important to check Ticketmaster regularly for details around additional ticket releases. 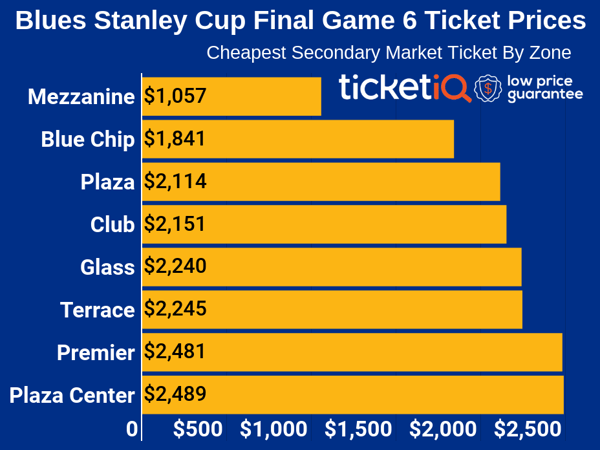 For now, fans should assume that the secondary ticket market is the best and only way to find  Blues Stanley Cup Finals tickets. Below are prices and links for each game, after fees.

For the 2019 Western Conference Final at Enterprise Center, Blues tickets are very affordable, at least compared to ticket prices for other conference finals this decade.  At a $267 average price across all the potential home games in the series, it's only more expensive than the 2012 Coyotes visit.  Despite the modest prices, tickets are almost completely sold out via Ticketmaster or the team's site. The lone exception to that are tickets are tickets in the rinkside club section, which are in the first four rows of the 100s level and are going for $600 each. For all else, the secondary market is the best option. 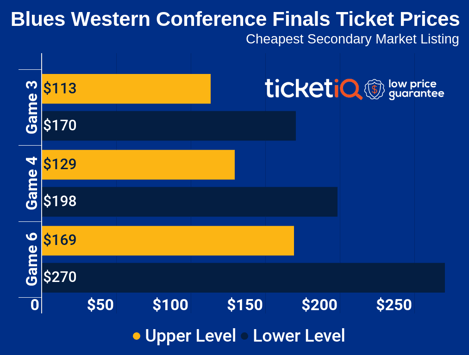 Fans looking to just get in should expect to pay around $120 for 300-level tickets in the upper rows for the first two games at Enterprise Center.   With TicketIQ's Low Price Guarantee, if you find the same ticket for less (after fees) on any other major secondary site like StubHub or Seatgeek, TicketIQ will give you 200% of the difference toward the purchase. 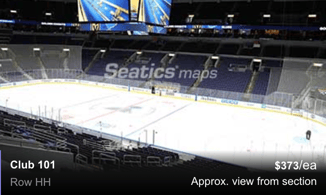 While prices at the SAP Center are historically cheap when it comes to all Western Conference Final ticket prices, they're also about 5% cheaper than the last time the Sharks and Blues faced off in a WCF series, in 2016 when the Sharks defeated the Blues in six games to advance to their only Stanley Cup Final. Currently ticket prices for Game 1 of the Stanley Cup Finals at SAP are going for over $700, which makes the prices for the Western Finals seem like an ever better value.
TicketIQ is a ticket marketplace with a Low Price Guarantee on all NHL Tickets. With TicketIQ's Low Price Guarantee, if you find the same ticket for less (after fees) on any other major secondary site like StubHub or Seatgeek, TicketIQ will give you 200% of the difference toward the purchase. 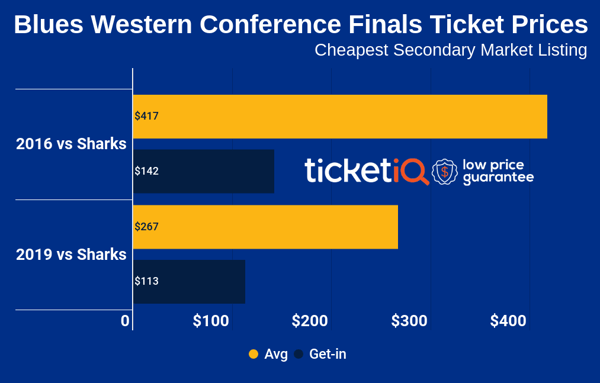 win against the Dallas Stars in Dallas, the Blues have forced a game 7. The Central Division rivals also went to a Game 7 when they met in the second round three years ago. That series finale was played in Dallas, where the Blues scored three times in the first period and went on to a 6-1 win. As the below infographics shows, that game was almost 20% more expensive than the game Tuesday at Enterprise Center.  It's also 6% cheaper than the last Blues Game 7 hosted in Saint Louis, which was for the 2016 Quaterfinals against the Blackhawks.

Below is a breakdown of cheapest 🎟 by section

The average asking price and get-in price for a second-round game at St. Louis are the cheapest across the NHL. St. Louis could host up to four games, and of the remaining games, Saturday’s Game 2 is the cheapest on the secondary market with an average asking price of $193. A potential Game 4 is trending at $277 and a potential Game 7 at $300. The Blues defeated the Winnipeg Jets in six games to advance to the second round for the third time in four seasons. During the regular season, Dallas beat St. Louis three out of four times. The teams have played twice in the postseason since 2000-01, and St. Louis won both times.

Based on cheapest tickets available for a series, game 1 was the 3rd cheapest second-round game in the NHL Playoffs over the last decade.

Where To Buy 2020-21 NHL Tickets Almost every team will have tickets available on both the primary and secondary ticket markets. For the primary market, the majority of teams use Ticketmaster,…