As of Thursday morning, the cheapest ticket for Super Bowl LIV is just over $5,000, and the average price is now right around $8,300, which is the most expensive average on the Wednesday before the game in 10 years. At this pace, the first-ever $10,000 average on game-day is more likely than not.

For fans that are not looking to spend that much but that have already booked flights and hotels, the good news is that there are more events than ever happening in Miami over the weekend that cost a lot less than $5,400. Starting Thursday, Miami will be the equivalent of a massive music festival with some of the biggest names headlining over 50 shows, including Maroon5, Guns N' Roses, Lizzo, Harry Styles, and Snoop Dogg.

Below, we take a look at all the major parties, events and concerts that will be happening in and around Miami as well as some data on what is likely to be the most active party scene for a Super Bowl weekend yet and a list of featured events. The tentpole event of the weekend is the Official 3-night Super Bowl Music Festival at American Airlines Arena, which is for $50 may be the best deal in Miami all weekend.

Not to be left out, however, Kanye West also just announced that he'll be performing his Gospel Choir on Sunday morning with tickets as low as $20 for the Lawn, for fans looking to pray for their team, or a last-minute miracle ticket. 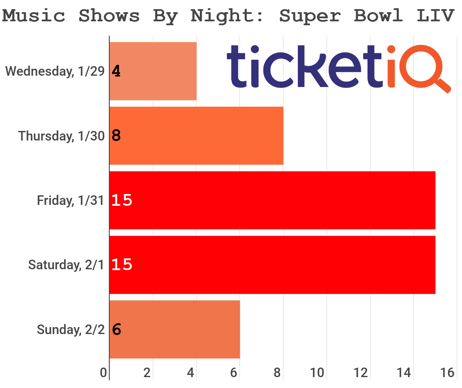 Below is more detail on some of the bigger events taking place this weekend. TicketIQ has Low Price Guarantees on Sold Out Super Bowl Party Tickets. That means that if you find a secondary market ticket for less on a site like StubHub or Vivid Seats, we’ll give you 200% of the difference in ticket credit. TicketIQ customers save an average of 5%-20% compared to StubHub and Vivid Seats.

Fans who love music as much as the Super Bowl can indulge in multiple concerts leading up to the big event. Among the performers are Maroon 5 (Saturday), Guns ‘N Roses (Friday), DJ Khaled (Thursday) and DaBaby (Thursday). More Details Here.

Live music, games and food trucks will be available during this four-day event, which is one of only handful that is appropriate for all ages. Fans can try kicking into a regulation-sized field-goal post or having a drink at the beer garden. The sports bar is over 21 starting at 10 p.m. nightly, and fans can purchase tickets for the Main Stage Pit, to get closer to the music.

This marquis event put on by the NFL is family friendly and allows fans to do skills tests, buy NFL and Super Bowl gear, and participate in interactive games. There will also be former and current players signing autographs. The convention center will be turned into an NFL wonderland.

Besides the entry fee, fans willing to pay $499 can meet Shaq. Among the other celebs expected at the event are Pitbull, Diddy, Diplo, Tiesto and DaBaby. The cost of a ticket includes a six-hour open bar, food and beverage selections from some of Miami’s top restaurants, as well as carnival games and rides and circus performers. A percentage of proceeds will be donated to the Camillus House.

Vewtopia Music Festival With Cardi B, Chris Brown and More

This concert is a chance to see Lady Gaga in a fairly intimate venue – the new Meridian Island Gardens seats about 10,000. Lady Gaga, who performed at halftime of the 2017 Super Bowl, is no stranger to putting on a riveting performance.

If you want a chance to see the Chainsmokers, Rick Ross and the Lost Kings, they’ll all be performing at this party. The event will take place on a private, five-acre property with a set-up just for the party. In addition to the entertainment, the Maxim Models and multiple celebrities and pro athletes will be in attendance. Fans can add on a VIP experience for an additional charge.

Foodies won’t want to miss this food-and-wine event that raises money for hunger-relief organizations. The event features a famous chef from each NFL city serving their signature dish alongside a current or former NFL player. There will be more than 35 food stations and a silent auction, as well as appearances by Don Shula and chef Andrew Zimmern.

This exclusive day-of-the-game event will be hosted by celebrity chef Guy Fieri, and will feature more than 30 active NFL players and celebrities. The cost of a ticket includes premium, all-you-can eat food and open bars. ESPN’s Sage Steele with host the event, and a percentage of proceeds will go to several charitable partners.

TicketIQ is committed to Transparent Ticketing, and we make much less on 'sold out' tickets compared to other major marketplaces like StubHub and Vivid. That means ticket buyers save from as much as 25% on TicketIQ for sports, music and theater tickets. We also back it up with our Low Price Guarantee on all sold out Super Bowl . We're able to do this because we also work with festival directly to help them sell tickets at face price, directly to consumers like you, through Ticketmaster, Frontgate, Eventbrite and others ticketing platforms.

Where to Find Cheap Tickets for SweetWater 420 Festival + 2020 LineUp