Earlier this week, USA Today reported that Major League Baseball has changed its ticket policy and will allow teams to determine their own policies for games postponed by the COVID-19 pandemic, which would allow ticket-holders to receive refunds. Nearly every team has released their updated policies, and you can find a link to your favorite team's update below.

As of 5/1, the Milwaukee Brewers are the only team to update their policy and not offer single-game ticket buyers a refund, however in an email to fans they said there would be "a special discount opportunity, with more information to come." The Arizona Diamondbacks and Washington Nationals are the only two teams that have not updated their policies, but that is expected to happen in the coming days.

Teams are offering a variety of option for fans, including credits, exchanges, and almost all of them are now offering full refunds. Most teams are offering refunds for games scheduled through May. A full list can be seen below:

Prior to this, the MLB had told teams to treat lost games as postponements, and that those ticket buyers could use the tickets for a makeup date or another game.

It was also reported that MLB officials are optimistic that the 2020 season will happen, and most likely begin in late June or early July.

MLB is considering a three-division, 10-team plan in which teams play only within their division – a concept gaining support among owners and executives. It would abolish the traditional American and National Leagues, and realign the divisions based on geography.

The plan, pending approval of medical experts and providing that COVID-19 testing is available to the public, would eliminate the need for players to be in isolation and allow them to still play at their home ballparks while severely reducing travel.

The article also stated that the games would most likely be played without fans in attendance.

With events being canceled or postponed due to the coronavirus daily, we wanted to take a look at the potential impact this will have on the secondary ticket market for the 2020 Major League Baseball season.

The estimates are based on secondary market value x the number of games canceled. Attendance for those games is based on the 2019 season averages for each team. This is not a precise measure, but it's the simplest way to benchmark magnitude of losses, by team and across the entire league.

It was originally announced that Opening Day would be delayed at least two weeks. However, with last week's CDC recommendation that organizers cancel or postpone events with 50 people or more for 8 weeks, that delay will likely be a lot longer. Due to that uncertainty, we've broken out the data to reflect three scenarios: games postponed through April, games postponed through the All-Star break, and a loss of the entire season (we don't expect the latter to occur).

By our estimates, the lost ticket revenue for the MLB is approximately $1 Billion just for March and April, and close to $2 billion if you include all May games. That number jumps to $2.5 Billion if half the season is lost and just under $5.1 Billion if the entire season is canceled. Here's a tracking sheet for value lost for each team in the MLB, NBA, NHL and each round of March Madness.

Below is a look the biggest ticket market losses by team.

Postponed Games Through May 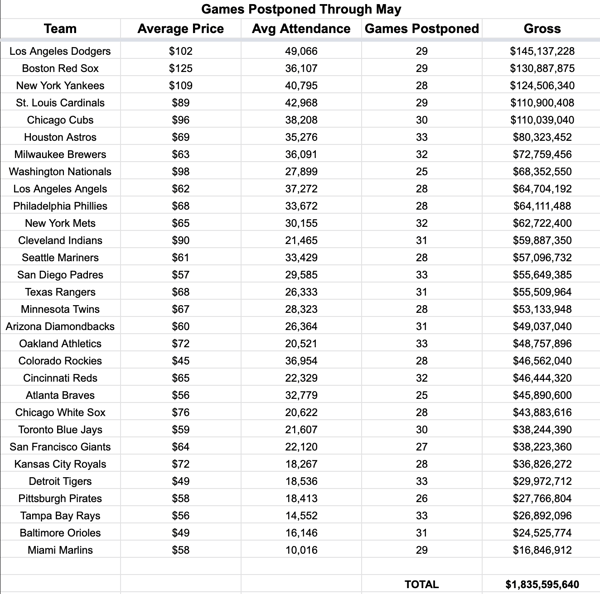 Postponed Games Through the All Star Break 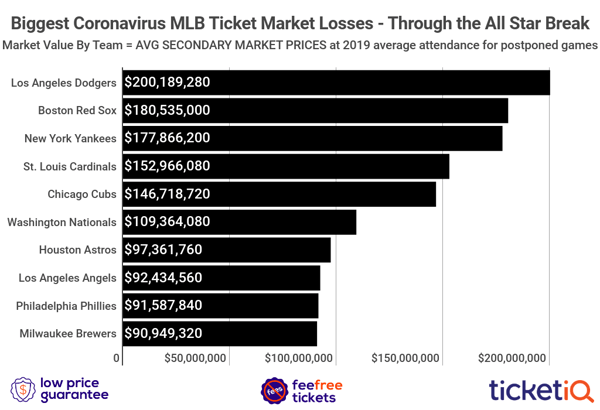 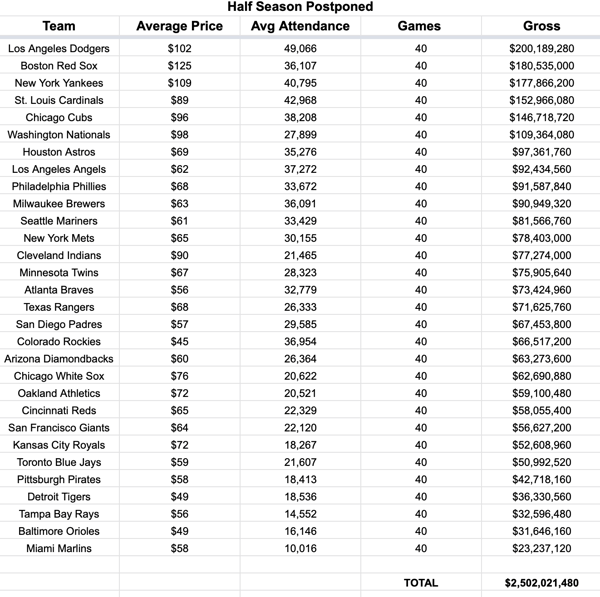 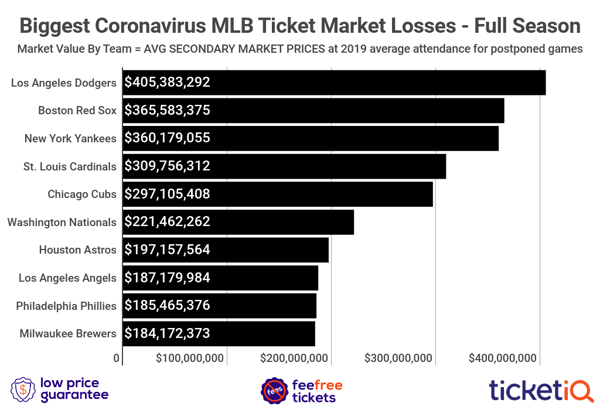 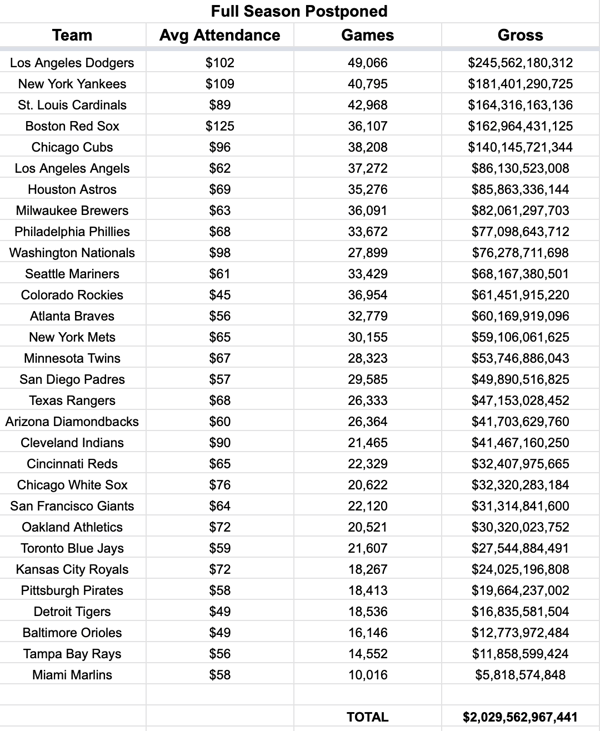 We also wanted to take a look at just the impact of Opening Day games for each team. For that, we took the secondary market average price for Opening Day at 100% capacity: 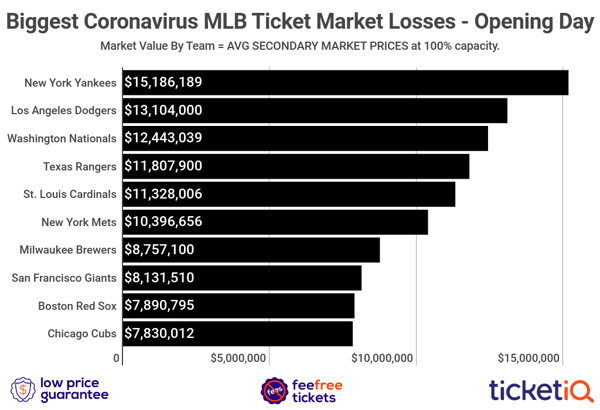 If you did purchase MLB tickets for the upcoming season and the game is canceled, here is some important refund information:

TicketIQ is committed to Transparent Ticketing, and we make much less on 'sold out' tickets compared to other major marketplaces like StubHub and Vivid. That means ticket buyers save from as much as 25% on TicketIQ for sports, music and theater tickets.  We're able to do this because we also work with festival directly to help them sell tickets at face price, directly to consumers like you, through Ticketmaster, Frontgate, Eventbrite and others ticketing platforms.