Music duo 21 Pilots continues its "Bandito Tour" when it kicks off the tour's third leg on October 9 in Tampa, Florida. The band will perform 18 shows across the U.S., ending on November 9 in Tulsa, Oklahoma.

Prior to the tour, the band will play at Chicago’s Lollapalooza on August 1, and the Outside Lands Music & Arts Festival in San Francisco’s Golden Gate Park on August 9.

Where To Buy Twenty One Pilots Tickets

Tickets to most of the tour shows can be had for under $100 on the secondary market, but during a West Coast stretch in late October and early November, demand for tickets in Las Vegas, Los Angeles, Anaheim, Sacramento and San Diego has pushed the average asking price well over $100.

Many higher-interest shows are nearly 100% sold out on the primary market.  On the secondary market, TicketIQ has seats to all shows, and in many cases, a larger selection, meaning fans should shop around.

TicketIQ also offers a Low Price Guarantee on Twenty One Pilots tickets for every stop on the "Bandito Tour", meaning that if you find a secondary market ticket for less on a site like Stubhub or Seatgeek, we'll give you 200% of the difference in ticket credit.

How Much Are Twenty One Pilots Tickets 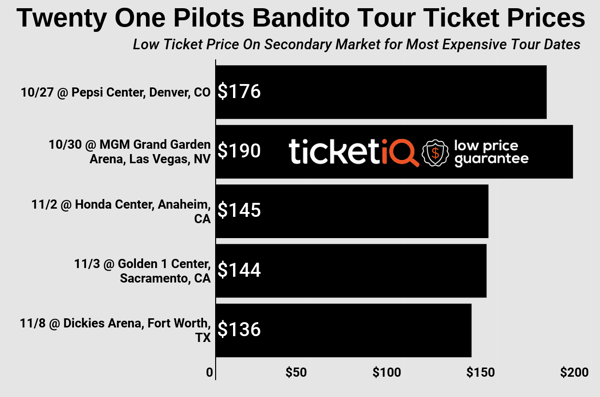 For the October 17 show at the Mohegan Sun in Connecticut, there are primary market seats available in only Sections 105, 118 and 120 available, starting at $84.75. All are side-view seats. For comparison, TicketIQ has seats throughout the venue available, including tickets in the General Admission section in front of the stage, starting $219.

Another show that merits comparison shopping is the November 2 show in Anaheim – one of two shows in the Los Angeles area. For that show, Ticketmaster has only two seats remaining, both in Section 305, Row D for $89.50. TicketIQ has a range of seats available for the show, from Terrace 402 starting at $154 to General Admission in front of the stage starting at $260. The other Los Angeles show is November 1 at Staples Center and tickets for that show are available through AXS on the primary market.

How Much Are Floor Seats For Twenty One Pilots Bandito Tour

The floor configuration for the Bandito Tour is a standard with GA standing room only floor setup. In some venues there is also a small B stage at the back end of the floor section, while other venues have the stage situated more towards the middle of the floor.  In a handful of markets, the cheapest floor seats start around $150, while in the majority of cities, you should expect to pay $250 or more.

Below is a look at the higher-interest shows, with the cheapest secondary market price starting at $118.

As if Twenty One Pilots weren't busy enough, they go ahead and announce a brand new tour for 2016.

The alt hip-hop duo is currently winding down a two-month run with Echosmith and on Monday announced the "Emotional Roadshow" Tour, which will hit U.S. cities between May and August of next year. The tour will run in support of Blurryface, the band's most recent studio album.

The tour kicks off on May 31 at U.S. Bank Arena in Cincinnati and winds across the country through August 10, wrapping at Madison Square Garden in New York City. Notable stops include Molson Canadian Amphitheatre in Toronto, Red Hat Amphitheatre in Raleigh, Greek Theatre in Berkeley, Austin 360 Amphitheatre and Viejas Arena in San Diego. 39 dates in total are scheduled over the 10-week trek.

The Average Twenty One Pilots Setlist For Their Fall Tour

Musical Duo Twenty One Pilots released their fourth studio album this past May, receiving good reviews and praise from music critics.  The duo has since been touring in other parts of the world to help support, including North American leg of their tour which already kicked off last Tuesday in Washington.  Twenty One Pilots will be touring for over the next month in North America with still 30 cities left to perform as their last show will be at the Eagles Ballroom in Milwaukee on October 30.

Twenty One Pilots tickets for their remaining fall tour have an average price of $209.60 on the secondary market.  There is only one show remaining on their tour with tickets going for an asking average price under $100 when the duo travels to Sumtur Amphitheater on September 23 in Papillion, Nebraska where tickets for this are going for just $93.17, with a get in price of $81.

Below is the average setlist for Twenty One Pilots for their concert shows in 2015, per data from setlist.fm:

Twenty One Pilots tickets have been in high demand since announcing a North American tour back in March. As the tour is set to kickoff Friday night in Philadelphia at Penn’s Landing’s Festival Pier, the band has been drawing high secondary market prices throughout the entire North American run. The current average price for TOP tickets is $213.23, thanks in part to many sold out shows across the run. The most expensive show come on October 15 at the Greek Theatre in Los Angeles. That show has an average price of $293.56 and a get-in price of $89. Only one show has an average below $100, a September 23 stop at Sumtur Amphitheater in Papillion, Nebraska at $92.75.

Twenty One Pilots are back with the follow-up to 2013’s Vessels. The Ohio-based duo has announced its intentions to release Blurryface, its fourth studio album, on May 19. Along with the new album news, TOP will also be hitting the road later this spring with Echosmith.

The band’s tour will kick off in the UK in May and will make its way to North America in September. Four UK dates are scheduled from May 11-14, though the UK leg won’t feature Echosmith. It will hit ABC2 in Glasgow, Deaf Institute in Manchester, Hare & Hounds in Birmingham and Electrowerkz in London.

25 shows in the U.S. and Canada will be held between September 11 and October 29. The tour’s North American leg will hit several big-name cities, including Toronto, New York, Kansas City, Atlanta, Orlando, Los Angeles and Vancouver. It officially wraps at the Myth in St. Paul, Minnesota on October 29.

Check out the full tour itinerary below and make sure to check back here for all tour updates and announcements. 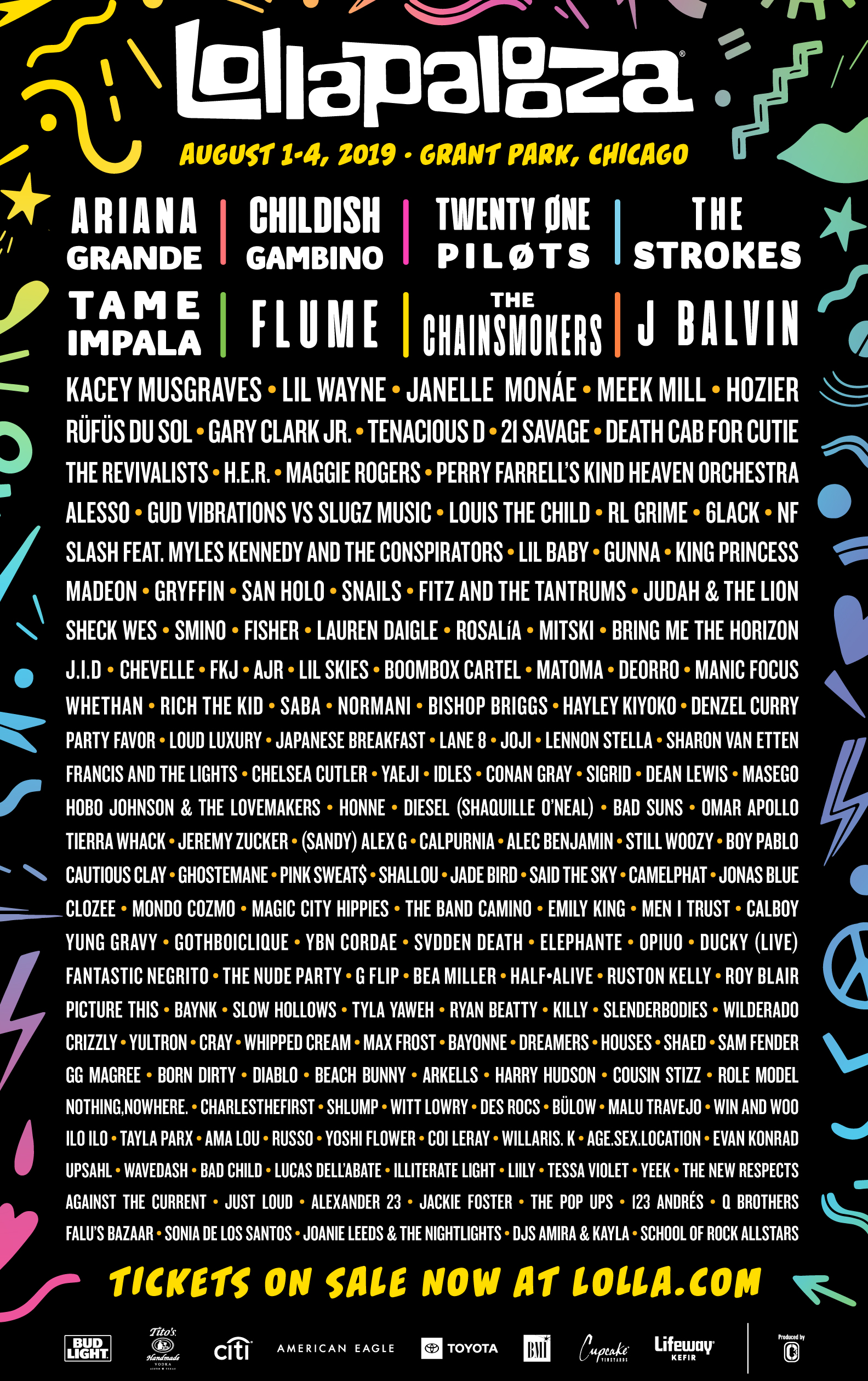 How To Find The Cheapest 2019 Lollapalooza Tickets + Face Value Options

The Average Twenty One Pilots Setlist For Their Current Tour