Rock band Vampire Weekend kicks off its North American "Father of the Bride Tour" June 12 in St. Louis and touches both coasts and Canada before winding things up at Red Rocks, Colorado on October 9. The band will perform two shows at Red Rocks, October 8-9, and two in Austin, Texas, August 20-21. Vampire Weekend's lone Canadian stop is in Burnaby, British Columbia on September 25.

Where To Buy Vampire Weekend Tickets

Tickets for Vampire Weekend are in high demand with many of the higher interest shows already sold out on the primary market, and others at about a 90% sellout. Many venues are general admission only.

TicketIQ has a Low Price Guarantee on Vampire Weekend tickets for every stop on the Father Of The Bride tour, in addition to Low Price Guarantees on all concert tickets, which means that if you find a secondary market ticket for less on a site like Stubhub or Seatgeek, we’ll give you 200% of the difference in ticket credit. TicketIQ customers save an average of 5%-20% compared to Stubhub and Seatgeek. Download the TicketIQ app for $20 off your first ticket purchase 📲 🎟️

How Much Are Vampire Weekend Tickets 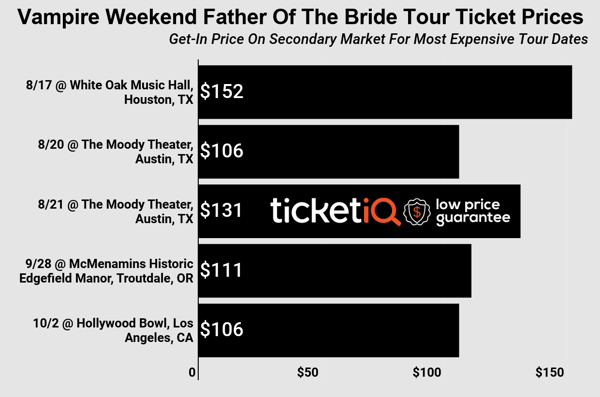 Both of the Austin shows are nearly sold out on the primary market, with limited seats available on the edge of the stage and Mezzanine seats starting at $305 for the August 21 show, and $245 for August 20. By comparison, TicketIQ has Mezzanine Level seats available starting at $172 on August 20, and General Admission Floor Tickets for $183 on August 21, meaning fans should shop around for availability.

Another example of why fans should comparison shop: Primary market tickets to the October 1 show in San Francisco are sold out, but on TicketIQ, General Admission Balcony tickets are available starting at $100.

The priciest Vampire Weekend ticket is June 23 at Dover International Speedway in Dover Delaware. Secondary market tickets start at a whopping $457, but the band is performing as part of the Firefly Music Festival, along with Post Malone, D.J. Snake, and a host of others.

Below is a look at the higher-priced shows, with secondary market get-in prices of $100 or more:

All Father Of The Bride Tour Dates