On the secondary market, TicketIQ has Fee-Free Washington Football Team tickets which also include a Refund Guarantee. Our Refund Guarantee states that if an event is canceled or deemed unfit for fans to attend, TicketIQ will refund ticket buyers in as soon as 15 days. That means that you can buy from TicketIQ worry-free. Customers on TicketIQ save between 15%-25% compared to other secondary market ticketing sites.

How Much Are 2021-22 Washington Football Team Tickets

At the Week 14 point in the season, Washington is 6-6 and 2nd in the NFC East. The team's attendance rate has been at 62.8% of capacity so far, a league low. The average price for Washington tickets is $346 and is an increase of 120.6% from 2019. The least expensive remaining game at FedexField this season is the January 2nd matchup against the Eagles. For this one, tickets start at $78. The most expensive remaining game of the season is the December 12th game against the Cowboys. For that game, the cheapest ticket starts at $161 for SRO, with the cheapest lower level ticket being $410 for a ticket in section 132. 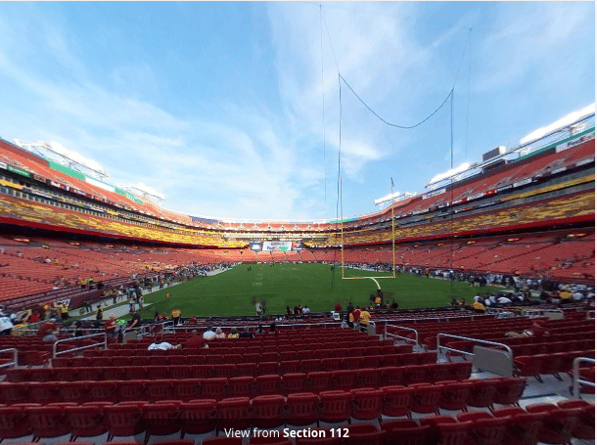 Information regarding the Washington Football Team updated 2021 attendance policy and potential capacity limits has not been released. However, it was also reported recently that 30 of the 32 NFL teams already have approval for full capacity at stadiums at the start of the 2021 preseason. The Denver Broncos and Indianapolis Colts have yet to get approval, but both teams are reportedly "on track".

The Football Team have three types of Premium or Club Options available for the 2020 season:

Dream Seats: Located in the first three rows of the stadium, the Dream Seats put fans at the heart of the action.

Merrill Lynch Touchdown Club: Tickets holders get prime lower-level seating at midfield as well as access to high-end hospitality, pregame field passes and one away game trip per season.

Club Level: Ticket holders get great views in these seats as well as access to the Club Level Concourse, which has many premium dining options.

Face coverings must be worn at all times, including in the parking lot, except when actively eating or drinking. Persons without masks will not be allowed to enter the stadium. This includes children over the age of 2 years old.

Frequently wash your hands and use hand sanitizer stations located throughout the stadium.

Sit only in your assigned / ticketed seat. Groups ticketed together will be seated together in groups of no more than 4 people.

Do not gather near or visit the Player entrance or parking area.

FedExField is now a cashless venue. Payment via credit/debit cards with scan/chip and mobile devices (ex: Apple Pay) at all points of sale will be accepted.

Head Straight Into The Stadium

Tailgating is not permitted. Tailgating is defined as loitering in the parking lot for any period of time. Once you exit your car you must enter the stadium.

Have Your Mobile Ticket Ready

Fans can download the Football Team app at the App Store or Google Play and use the app for access to FedEx Field, to purchase, sell or transfer tickets, and to get up-to-date game information.

(UPDATE 8/12) The Washington Football Team announced today that games at FedExField will be played without fans during the 2020 season. Here's some more info from the announcement:

The franchise has reached out to season ticket members with financial alternatives for their ticket plans. Similarly, the customer service team will be prepared to answer questions from those who have purchased single-game tickets for the 2020 season and information will be available on the tickets section of WashingtonFootball.com.

Fans will be able to learn more about ways to cheer on the Washington Football Team virtually prior to the Week 1 matchup against the Philadelphia Eagles on September 13th via the team's website or by following @WashingtonNFL on Facebook, Twitter and Instagram.

Season ticket holders have the option to defer their 2020 season tickets to the 2021 season. They can also request a full refund or a credit to their account.

They also announced new safety and secures measures which can be found here. These include mandatory face coverings for fans attending games.

All tickets this year will be mobile entry only.

More details are expected to be announced soon.

How Much Are 2020 Washington Football Team Tickets

According to TicketIQ, the secondary market average for a Washington Football Team ticket is $320, up 104% over the 2019 season. Since then, the Football Team hired new head coach Ron Rivera and drafted defensive end Chase Young with the No. 2 pick. The average asking price ranks No. 21 across the league. The cheapest ticket is $142 to see the Detroit Lions and priciest is $1,098 to see the Raiders.

How Much Are 2019 Football Team Tickets

The two most expensive tickets to see the 2019 Football Team are the home opener against the Cowboys and three weeks later against the defending Super Bowl champion New England Patriots. The average asking prices for those games is $261 for the Cowboys game and $263 for the Patriots.

Face value tickets are available for all home games through Ticketmaster. Tickets for the Cowboys game start at $155, $90 for the Bears game, $191 for the Patriots game, $71 for the 49ers, Jets, Giants and Lions game and $90 for the Eagles game. 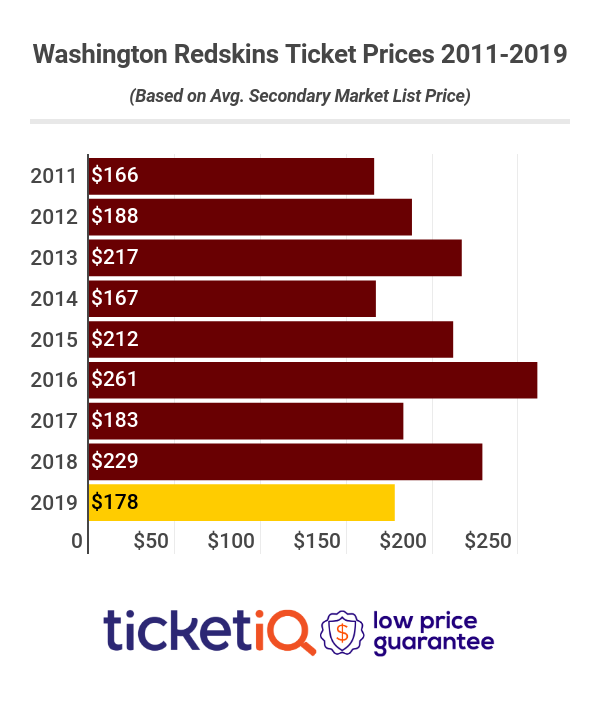 With new technology, the Football Team and other NFL teams are selling more tickets directly to fans than ever

With the NFL kickoff here, the post-waitlist era of Football Team ticket buying also arrives . With less than two weeks until the home opener, not only are season tickets available for sale, but so are single game tickets for every game, from the home opener against the Colts to the highest-demand games like the Cowboys.

The new approach to ticket selling--specifically actually having tickets to sell--is also impacting the secondary market. According to data from TicketIQ.com, Football Team tickets on the secondary market have an average asking price of $229. That’s up 24 percent from last year’s price and the second-highest price in the last eight years. With so many more tickets available for sale directly from the team, there’s less supply on secondary, which sends up prices.

One important thing to consider this season is that all tickets to get into FedExField are eTickets, so you’ll need to have the Ticketmaster app or the ticket saved on your phone to actually get in. The Football Team are not completely ready to move away from the season tickets, however. In fact, they’re using high secondary market prices to show how much money fans save if they buy season tickets directly from the team. 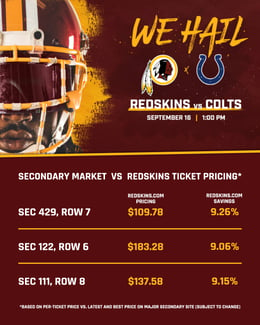 For the Football Team, who until earlier this year claimed a 20-year waitlist, this is a new and relatively brave model, and likely what the NFL envisions for the future of ticketing. While 2018 will likely mark the year the NFL jump into the single-game ticket selling business.  It's a model that more and more teams are testing as well. Most notable of these was the Golden State Warriors in the 2018 NBA finals  who did not sell out at the start of the game, as Darren Rovell also tweeted.

Like the Warriors last season, the Football Team this season have realized that they need to be selling when fans are buying. In 2018, that often means in the days and hours before a game.  After playing catch-up with the secondary market for almost 20 years, teams are now even in actively playing in last-minute ticket-buy world that Stubhub, Gametime and other secondary sites created and perfected. Underlying the shift is the new Ticketmaster-NFL deal that gives all NFL teams the ability to sell inventory directly on partner sites, including Stubhub.

For the full 2018 NFL ticket report, visit the TicketIQ blog.

The 2021 NFL regular season has come to an end and the playoffs are here. Below, we will breakdown attendance policies,  and primary and secondary market ticket pricing for each team. Also, be…

How To Find Cheapest Giants Vs. Redskins Tickets In 2020

How To Find Cheapest Cowboys Vs. Redskins Tickets In 2020

How To Find Cheapest Cowboys Vs. Redskins Tickets in 2020

How To Find The Cheapest Redskins Vs. Jets Tickets + Face Value Options