Where To Find The Cheapest 2021 ACC Championship Game Tickets

Wake Forest is set to face off against Pittsburgh in the 2021 ACC Football Championship. The game is set for December 4th and will be played at Bank of America Stadium in Charlotte, NC.

On the secondary market, TicketIQ has Fee-Free ACC Championship Game tickets with a Refund Guarantee, which states that in the event an event is canceled or deem unfit for fans to attend, TicketIQ will refund ticket buyers in as soon as 15 days. That means that you can buy from TicketIQ worry-free.

How Much Are 2021 ACC Championship Game Tickets 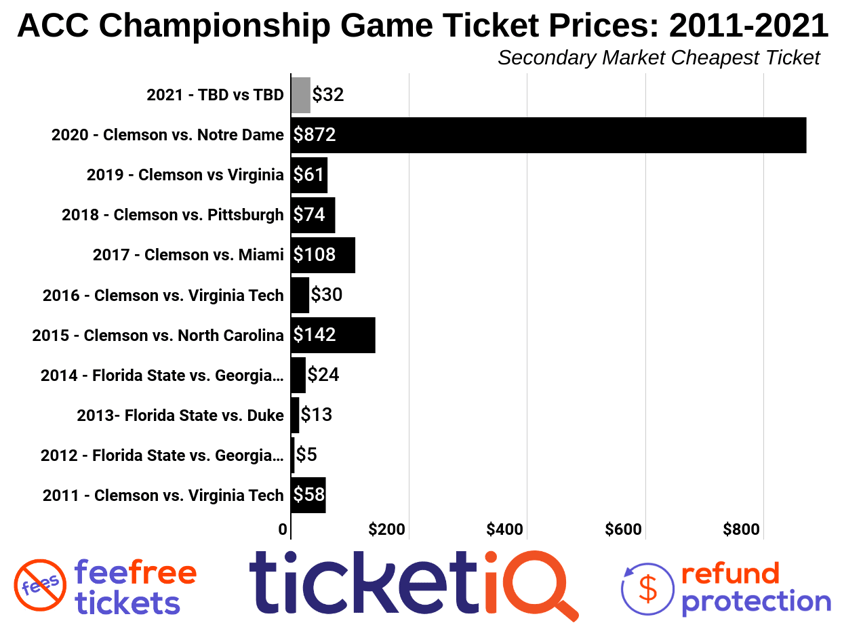 How Much Are 2020 ACC Championship Game Tickets

The get-in price for this year's game is $872, which is 1330% higher than last year and is also the most expensive this decade.

Below is a chart showing the get-in prices for each ACC Championship Game since 2011:

No. 3 Clemson (Atlantic Division champion) and No. 22 Virginia (Coastal Division champion) have secured their spots in the 2019 ACC Championship Game set for December 7 at Bank of America Stadium in Charlotte. Per Caesars Sportsbook, Clemson is favored by 29 points.

Where To Buy ACC 2019 Championship Tickets

Primary market tickets to the December 7 Pac-12 Championship game at Bank Of American Stadium are available via Ticketmaster, and there are still plenty of options throughout the stadium.

On the secondary market TicketIQ will offer fans a Low Price Guarantee on all sold-out ACC Championship game tickets. That means that if you find a secondary market ticket for less on a site like StubHub or Vivid Seats, we’ll give you 200% of the difference in ticket credit. TicketIQ customers save up to 25%.

How Much Are ACC 2019 Championship Tickets

On the primary market, tickets start at $41.95 in the 500 sections -- whether on the corners or above the sidelines. There are also limited sections still available in the 300 Sections on the corners starting at $163.17, and along the sidelines starting at $233.10. All available 300-Section seats are Club Seats, meaning that patrons have access to lounges that include HDTVs and high-end food-and-beverage options. The seats closest to the action that are still available are in five 100-Level sections. Section 130 at the 30-yard line on the Coastal Division side is the best available, and seats in Row 16 start at $186.48. The closest 100-Level seats are in Row 8, Section 128 at the 10-yard line on the Coastal Division side. End-zone sections are sold out at all levels.
On the secondary market, the average asking price on the secondary market is $161, down from $164 in 2018. The game is the third priciest on the secondary market among the Power-5 Conferences, with $689 for the SEC Championship leading the pack.
The cheapest seat onn the secondary market for the ACC Championship is currently $61 and there is a wider selection of seats, including end-zone seats on the 500, 200 and 100 levels and Club Seats in more than 15 sections on the 300 Level. Among the Club Seats still available with the TicketIQ Low Price Guarantee are seats in Club 314, Row 1 at the 40-yard line on the Clemson side for $595. Fans can get nearly as close on the Coastal Division side, with seats in Club 343, Row 2 starting at $344. Corner and end-zone seats on the 200 Level start at $105 and 100-Level end-zone seats start at $122, but fans can get seats in the first row in Sections 103, 122 and 123 starting at $174. Along the sidelines on the 100 Level, seats range in price from $181 in Lower 129, Row 10 to $546 in Lower 111, Row 1A at the 50-yard line on the Clemson side.

TicketIQ is committed to the cheapest tickets possible, and we make much less on sold out tickets compared to other major marketplaces like StubHub and Vivid. That means ticket buyers save from up to 25% on TicketIQ on sports, music and theater. We're able to do this because we also work with teams, venues, and other ticket owners, to help them sell tickets at face price, directly to consumers like you, through Ticketmaster and Paciolan. For an overview of the 2019 College Football Ticket Buying landscape, and details on the cheapest way to get tickets College Football Playoff tickets, visit the TicketIQ Blog.

Where To Find The Cheapest 2021 Big 12 Championship Game Tickets