Where To Find The Cheapest 2021 Big 12 Championship Game Tickets

The 2021 Big 12 Championship game match-up is set for Saturday, December 4 at AT&T Stadium in Arlington, Texas.

On the secondary market, TicketIQ has Fee-Free Big 12 Championship Game tickets with a Refund Guarantee, that states that in the event an event is canceled or deem unfit for fans to attend, TicketIQ will refund ticket buyers in as soon as 15 days. That means that you can buy from TicketIQ worry-free.

How Much Are 2020 Big 12 Championship Game Tickets

Below is a chart showing the get-in prices for each Big 12 Championship Game since 2017: 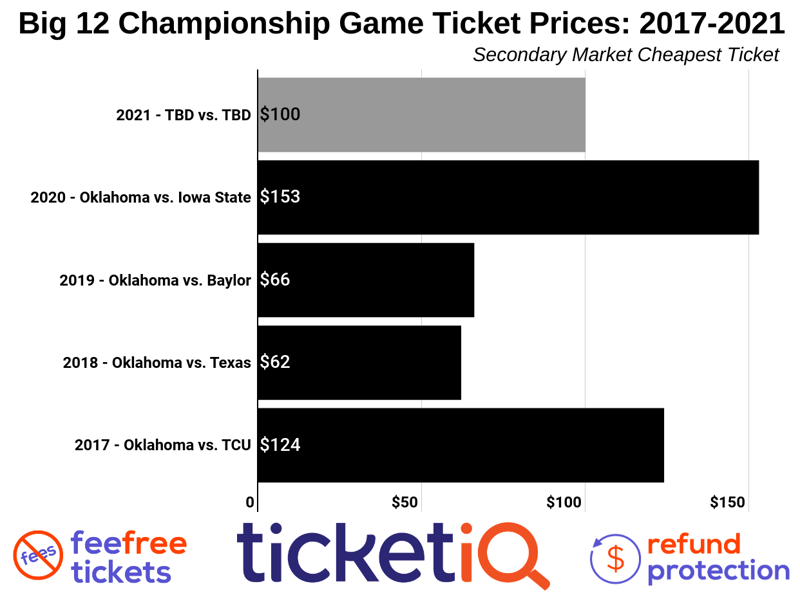 Oklahoma has won the last two Big 12 Championships, and will have a shot at making it three in a row when they take on the Baylor Bears in the 2019 Big 12 Championship game. Vegas certainly thinks Oklahoma will do just that, and has them as 8 point favorites in the game.

Where To Buy 2019 Big 12 Championship Tickets

On the secondary market TicketIQ will offer fans a Low Price Guarantee on all sold-out Big 12 Championship game tickets. That means that if you find a secondary market ticket for less on a site like StubHub or Vivid Seats, we’ll give you 200% of the difference in ticket credit. TicketIQ customers save up to 25%.

How Much Are  2019Big 12 Championship Tickets

For anyone wanting to treat themselves, there is one suite listed on TicketIQ for $15,113. Field and Touchdown Suite EL 102 in the end zone comes with 20 tickets and four parking passes. Suites also have indoor, padded seats, private rest rooms, and a kitchenette, though food and beverage is not included.

TicketIQ is committed to the cheapest tickets possible, and we make much less on sold out tickets compared to other major marketplaces like StubHub and Vivid. That means ticket buyers save from up to 25% on TicketIQ on sports, music and theater. We're able to do this because we also work with teams, venues, and other ticket owners, to help them sell tickets at face price, directly to consumers like you, through Ticketmaster and Paciolan. For an overview of the 2019 College Football Ticket Buying landscape, and details on the cheapest way to get tickets College Football Playoff tickets, visit the TicketIQ Blog.