›  › Where to Find The Cheapest National Finals Rodeo Tickets (NFR)

Where to Find The Cheapest National Finals Rodeo Tickets (NFR)

The Wrangler National Finals Rodeo, is the season-ending championship event for the Professional Rodeo Cowboys Association and has been held annually since 1959. Since 1985, it's been held every December at the Thomas & Mack Center in Las Vegas. At the conclusion of the Wrangler NFR, the sport’s world champions are determined based on total season earnings – what they win during the Wrangler NFR added to what they won before the Wrangler NFR.

The Wrangler NFR consists of 10 rounds on 10 consecutive days. Cowboys and barrel racers earn money by placing first through sixth in any round, and pick up more money by placing first through eighth in the average (cumulative times or points earned during the 10 rounds). At the end of each Wrangler NFR, there are two champions in each event (four for team roping) which includes the average winner, with the best cumulative time or score, and the world champion, who finished the year with the most money.

Below is a seating chart for the cheapest night, which is Monday December 9th at the Thomas and Mack Center in Las Vegas, Nevada. 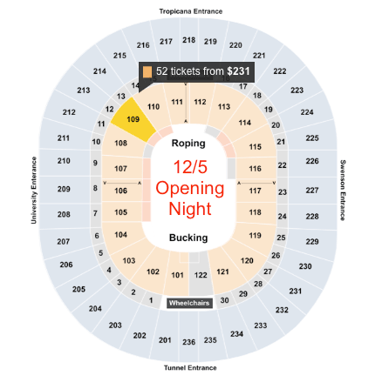 You no longer need your printed souvenir ticket to access the Thomas & Mack Center for NFR performances. If you choose, you may use your smart phone to display a valid barcode to be scanned for entry. If you forget your tickets or just choose this method of entry for convenience, simply follow the steps previously indicated to access your tickets on your phone.

If you plan to use your smart phone for entry, please be certain that you have not distributed the printed paper hard ticket to anyone else.

TicketIQ is committed to Transparent Ticketing, and we make much less on sold out tickets compared to other major marketplaces like StubHub and Vivid. That means ticket buyers save from up to 25% on TicketIQ on sports, music and theater. We're able to do this because we also work with teams, venues, and other ticket owners, to help them sell tickets at face price, directly to consumers like you, through Ticketmaster and AXS.