Coachella is back for its 21st year in Indio California. The festival  is the unofficial start to the festival season. As always, Coachella will be held at the Empire Polo Club in Indio, California over two April weekends of April 10th-12th and April 17th-19th.

A reunited Rage Against the Machine, Travis Scott and Frank Ocean will headline the 2020 Coachella Valley Music and Arts Festival when it returns to the Empire Polo Club in Indio for twin weekends April 10-12 and April 17-19, organizers announced on Thursday, Jan. 2. Weekend 1 passes sold out in the advance sale over the summer but tickets for Coachella 2020 Weekend 2 go on sale at noon Monday, Jan. 6 for fans who registered in advance. Any remaining tickets will go on sale to the public at 3 p.m.

How Much Are Coachella Festival '20 Tickets

TicketIQ provides Low Price Guarantees on Sold Out Coachella Festival tickets. The tickets for Weekend one have already sold out, and the cheapest 3-day passes are available for $500. VIP tickets start at $1,215.

For weekend two, a 3-DAY GENERAL ADMISSION tickets costs $469, while 3-DAY VIP passes can be purchased for $982 per ticket.

TicketIQ has Low Price Guarantees on Sold Out Coachella Tickets, in addition to Low Price Guarantees on all Sold Out Music Festivals. That means that if you find a secondary market ticket for less on a site like StubHub or Vivid Seats, we’ll give you 200% of the difference in ticket credit. TicketIQ customers save an average of 5%-20% compared to StubHub and Vivid Seats.

What Is The Coachella Music Festival '20 Lineup

Below is the lineup card for 2020 Coachella by day as well an alphabetical list of all currently announced performers. 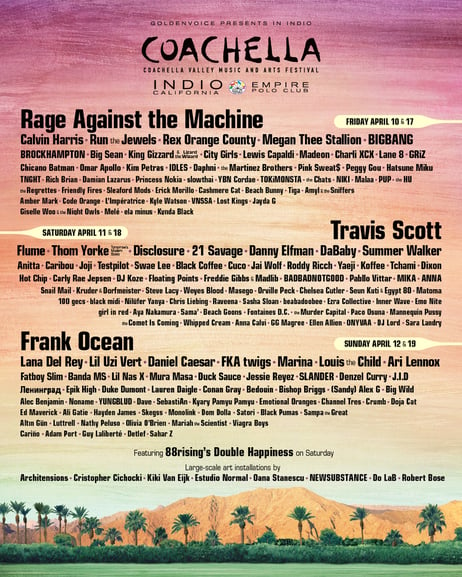 For some commentary and analysis on the 2020 lineup, here's a video to check out

What Are Best Hotel and Home Rental Options For Coachella 2020