Billed as the World’s Largest Rock ‘N’ Roll Whiskey Festival, Louder Than Life is set for September 23rd through the 26th at the Highland Festival Grounds at KY Expo Center in Louisville, Kentucky. The lineup has been announced and features headliners Metallica, Disturbed, Machine Gun Kelly, Snoop Dogg, Janes Addiction, Korn, Staind, and many other great acts. Check out the full lineup at the bottom of this post.

Where To Buy Louder Than Life Tickets

On the primary market, tickets are available via Frontgate.

On the secondary market, TicketIQ has Fee-Free Louder Than Life tickets which also include a Refund Guarantee. Our Refund Guarantee states that if an event is canceled or deemed unfit for fans to attend, TicketIQ will refund ticket buyers in as soon as 15 days. That means that you can buy from TicketIQ worry-free. Customers on TicketIQ save between 15%-25%

How Much Are Louder Than Life Tickets

Weekend Top Shelf VIP passes, a go-to option for all music patrons who love tents with live streaming of the Oak and Barrel stages and a shaded viewing deck, were $1,329, but are now sold out. 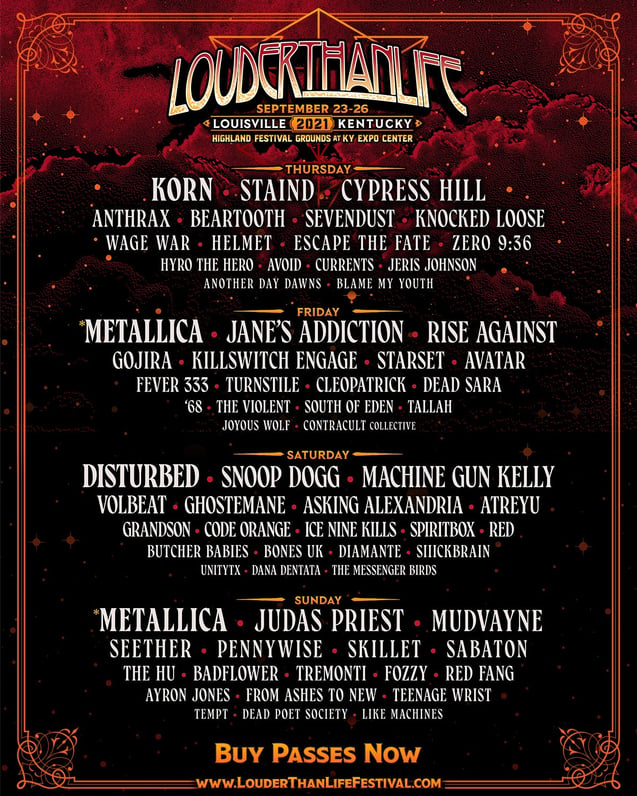 TicketIQ sells Tickets for Sold Out Sports, Music, and Theater events. TicketIQ is committed to Transparent Ticketing, and we make much less on sold-out tickets compared to other major marketplaces like StubHub and Vivid. That means ticket buyers save from up to 25% on TicketIQ on sports, music, and theater. We're able to do this because we also work with teams, venues, and other ticket owners, to help them sell tickets at face price, directly to consumers like you, through Ticketmaster, Frontgate, Eventbrite, and other primary ticketing platforms. You can read our concert ticket Buying Guide that we think is the most objective advice on where to find the best deals on the biggest concert tours, whether they're 'sold out' on TicketIQ or 'unsold' on the primary ticket market.

How To Find The Cheapest 2022 WNBA Playoff & WNBA Finals Tickets