With the 8 XFL now named, for fans looking to get a jump on ticket, $50 deposits are available for all teams, which include New York, Dallas, Houston, Los Angeles, St. Louis, Seattle, Tampa Bay, and Washington, D.C.

Fans who are looking to get to know their teams, the draft takes place Oct. 15 and 16. Each team will make 30 picks in total. There will be five phases to the draft — offensive skill positions, offensive line, defensive line and linebackers, secondary and open phase.

How Much Are XFL Tickets

Where Is the Best Place to Buy XFL Tickets

Most teams have unsold face value tickets available for all their games, through the league ticketing partner, Ticketmaster. All but two teams are playing in NFL stadiums, and only the lower two levels are opened for the games, which means that capacity for most games will be around 30,000 fans, making fort an intimate environment. The below screenshot show available sections for the Seattle Dragons gamem with darker blue sections having more tickets and lighter blue sections having less tickets. 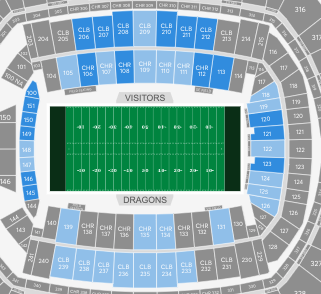 Where Is the XFL Schedule

Where To Find The Cheapest Broncos Vs. Raiders Tickets In 2019