Where To Find The Cheapest Boston Red Sox Playoff Tickets

by TicketIQ
Where to Buy 2021 Boston Red Sox Playoff Tickets

On the secondary market, TicketIQ has Fee-Free Boston Red Sox playoff tickets which also include a Refund Guarantee. Our Refund Guarantee states that if an event is canceled or deemed unfit for fans to attend, TicketIQ will refund ticket buyers in as soon as 15 days. That means that you can buy from TicketIQ worry-free. Customers on TicketIQ save between 15%-25% compared to other secondary market ticketing sites.

How Much Are 2021 Boston Red Sox Playoff Tickets

Of the two LCS series, the ALCS is by far the more expensive on the secondary market. Ticket prices for the entire series are averaging $410. The Red Sox are slightly more expensive of the two teams, with the average price for their home games at $417. That is just 3% higher than the Astros, who have an average price of $404 for their home games.
The Red Sox ALCS average is the least expensive since 2013. In 2018 their ALCS average was $598, and in 2013 it was $679. Interestingly, the $404 average for the Astros is their second-highest this of their last four trips to the ALCS, behind only the 2017 series, when their average price was $425.
While the average prices are similar, the cheapest tickets in each stadium are quite different. Prices at Minute Maid Park in Houston start at $93 for game 1 and $109 for game 2, $174 for game 6, and $173 for a potential game 7. At Fenway Park, the cheapest tickets are $191 for game 3, $166 for game 4, and $191 for game 5.

Below is a look at Red Sox ALCS ticket prices since 2013, as you can see this year's prices are the least expensive: 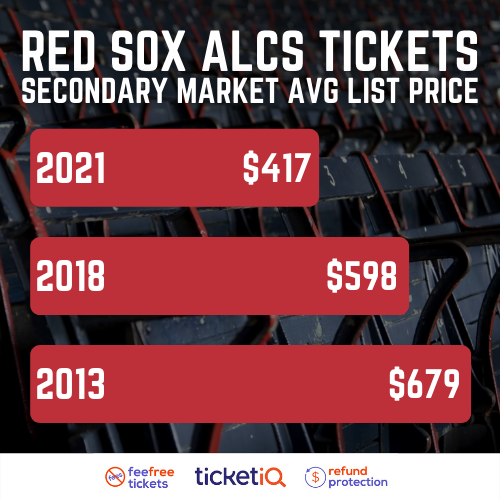 Fenway Park will operate at full capacity for the 2021 MLB Playoffs.

Boston has reinstated an indoor mask mandate. Masking will be required in all publicly accessible indoor spaces at Fenway Park, regardless of vaccination status, with the exception of those who are actively eating and drinking. This includes:

Those who are not full vaccinated are encouraged to wear a mask at all times. Masks must cover both nose and mouth.