For 2021, Tickets For Some of The Biggest Music Festivals Are Over 50% Below Face Value

Where To Buy 2021 Music Festival Tickets

With fans headed back to venues, there’s plenty of opportunity for fans to see live music festivals in 2021. While fans are used to paying big bucks for the biggest festivals, on 2021 there's more value than ever, with half of the highest priced festivals on the secondary market below face prices--in some cases by over 50%.  The bottom line is if you haven't bough a ticket yet, but are planning to, you're likely better off waiting until the week of the event before making the purchase.

TicketIQ has Fee-Free Music Festival tickets which also include a Refund Guarantee. Our Refund Guarantee states that if an event is canceled or deemed unfit for fans to attend, TicketIQ will refund ticket buyers in as soon as 15 days. That means that you can buy from TicketIQ worry-free. Customers on TicketIQ save between 15%-25% compared to other secondary market ticketing sites.

For music lovers trying to figure out where to buy tickets to the hottest upcoming Music Festivals and how much you should expect to pay, we've put together a comprehensive overview on the biggest tour of the summer and analyzed Ticketmaster, Frontgate, Eventbrite, AXS and other major ticket buying platforms, as well as TicketIQ for secondary market, or 'sold out' tickets. 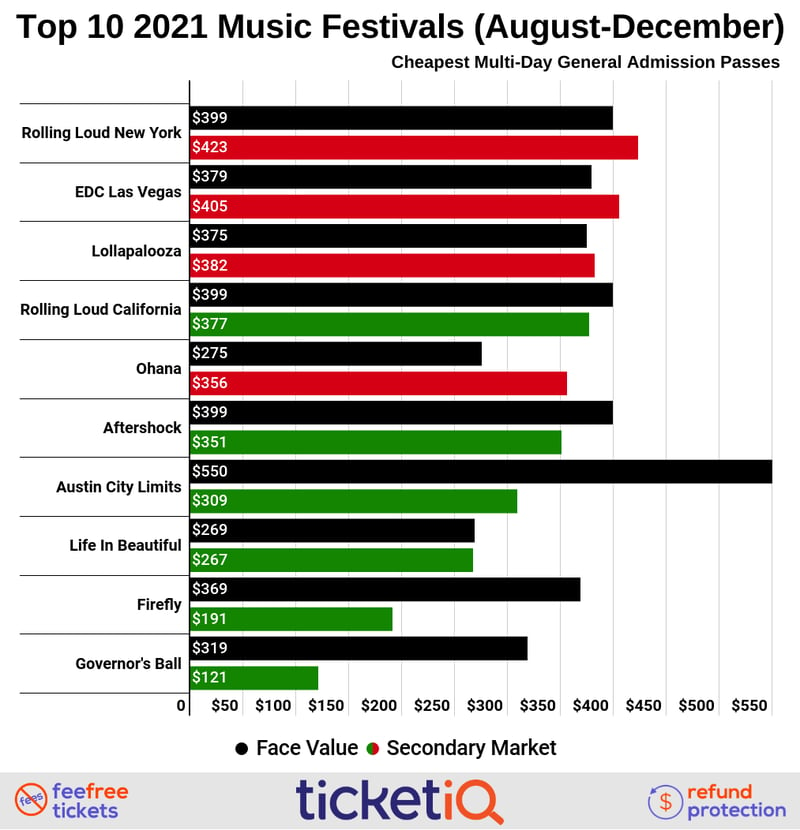 Below is a breakdown of each of the above festivals:

Lollapalooza returns to Chicago's Grant Park in 2021 for its usual four-day festival from July 29th through August 1st. The lineup has also just been released and headliners include Foo Fighters, Post Malone, Miley Cyrus, and Tyler, The Creator.

How Much Are Lollapalooza Tickets & Passes

How Much Are Life is Beautiful Tickets & Passes

The Governor's Ball Music Festival combines music, art, food, unique experiences and plenty of surprises to make it a one-of-a-kind music festival. The event was designed by New Yorkers for New Yorkers. The 2021 show will be the 10th annual, and take place on September 24th - September 26th. In 2022 the festival will be returning to their normal June dates.
The 2021 lineup has been announced. Headliners include Billie Eilish, A$AP Rocky, J. Balvin and Post Malone.

How Much Are Governor's Ball Tickets & Passes

Virtually sold out.  Prices on the primary market for 3-day passes were $319 + fees prior to selling out.

The Firefly Music Festival is entering its tenth year and is set to take place from Thursday, September 23rd through Sunday, September 26th at The Woodlands in Dover, Delaware.

The 2021 lineup has also recently been announced and this year's headliners include Billie Ellish, Lizzo, Tame Impala, and The Killers. Check out the full lineup at the bottom of this post.

How Much Are Firefly Tickets & Passes

Single-day pass are still available and are priced at $135 for General Admission and $285 for VIP.

Eddie Vedder's Ohana Fest is returning to Doheny State Beach in Dana Point, California, in 2021 on September 24th-26th, 2021, with an Encore weekend set for October 1st and 2nd.

Vedder will serve as a headliner for two of the three nights. He will perform a solo set on Saturday before performing with the rest of Pearl Jam to close out the festival on Sunday. Kings of Leon will headline the first night. Some other notable performers in the lineup include My Morning Jacket, Spoon, Brandi Carlile, Black Pumas, and Cold War Kids. For the encore weekend Pearl Jam, Brandi Carlile, and Beck are set to headline. You can check out the entire lineup for both the main festival and encore at the bottom of this post.

How Much Are Ohana Festival Tickets & Passes

Austin City Limits returns for its 20th anniversary in 2021, and will take place on the weekend's of October 1-3 and 8-10. The lineup has just been announced and headliners include George Strait, Billie Eilish, Stevie Nicks, Miley Cyrus, Rufus Du Sol, Dababy and Erykah Badu.

How Much Are Austin City Limits Tickets & Passes

For Weekend Two, prices are about 10% more expensive for 3-day and single day tickets.

A very limited amount of Single-Day GA+ Passes and Single-Day VIP Passes are also available for each weekend, and prices start at $600+

Aftershock Festival, the annual rock and metal festival sponsored by Monster Energy, is back in Sacramento, California for 2021. Beginning in 2012, the festival expanded from a one-day concert to a two-day festival. For the 2021 edition, the festival expanded to four days and it takes place from Thursday, October 7th to Sunday, October 10th at Discovery Park, which is located at 1000 Garden Highway in Sacramento, California. Doors open at 11 am each day.

How Much Are Aftershock Tickets & Passes

Electric Daisy Carnival Las Vegas is back for 2021 and will once again return to its Las Vegas Motor Speedway home on October 22nd, 23rd, and 24th for three splendid nights of music, art, and community. The festival also offers yoga, sound healing, and guided meditation classes, daytime pool parties, and a curated guest speaker series.

The lineup has also just been released and features artists like Tiësto, Alesso, The Chainsmokers, deadmau5, DJ Snake, Martin Garrix, Diplo, and many more.

How Much Are EDC Las Vegas Tickets & Passes

Sold out. Prior to selling out, three-day passes were $379 plus fees, which are usually an additional 20%.

The 3-day Rolling Loud New York festival is set to take place on October 28th-30th, 2021 at the Citi Field in Queens, NY.

The lineup has been announced and some of the major artists include headliners 50 Cent, J. Cole, and Travis Scott.

How Much Are Rolling Loud New York Tickets & Passes

Rolling Loud CaliforniaFor 2021, Tickets For Some of The Biggest Music Festivals Are Over 50% Below Face Value

The 3-day Rolling Loud California festival is set to take place on December 10th-12th, 2021 at the NOS Event Center in San Bernardino, CA.

The lineup has been announced and some of the major artists include headliners Kid Cudi, J. Cole, Future, along with Wiz Khalifa, Kodak Black, French Montana, Ty Dolla $ign, Gucci Mane, 2 Chainz and many more. Chris Brown and Young Thug are also listed as special guests.

How Much Are Rolling Loud California Tickets & Passes

2021 Music Festivals: By The Numbers 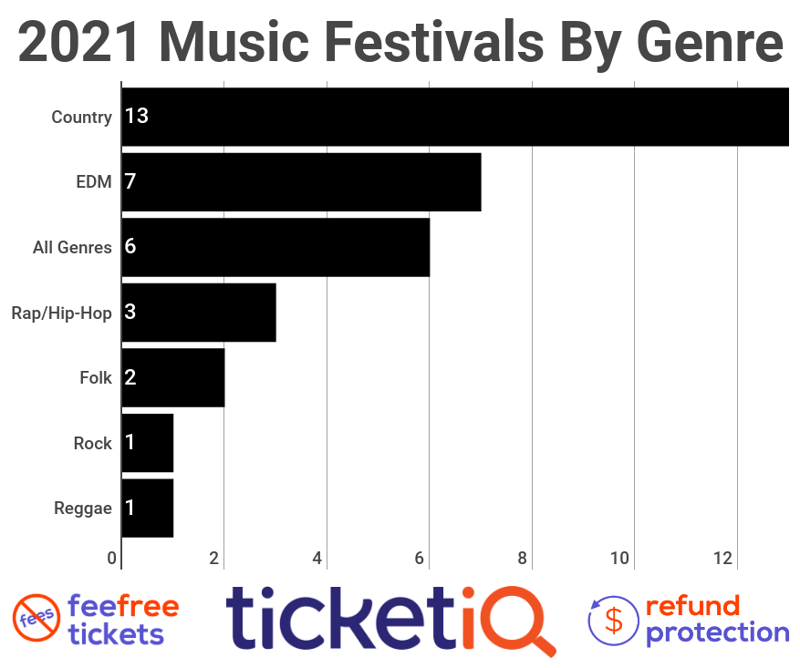 No matter where you are in the country, you should be pretty close to an upcoming festival or two. From now through June, music festivals are taking place in 20 US State. However, the most popular destinations for Music Festivals are California with 6 and Florida with 4. Below is a list of each state and the number of festivals taking place there on the 2020 calendar. 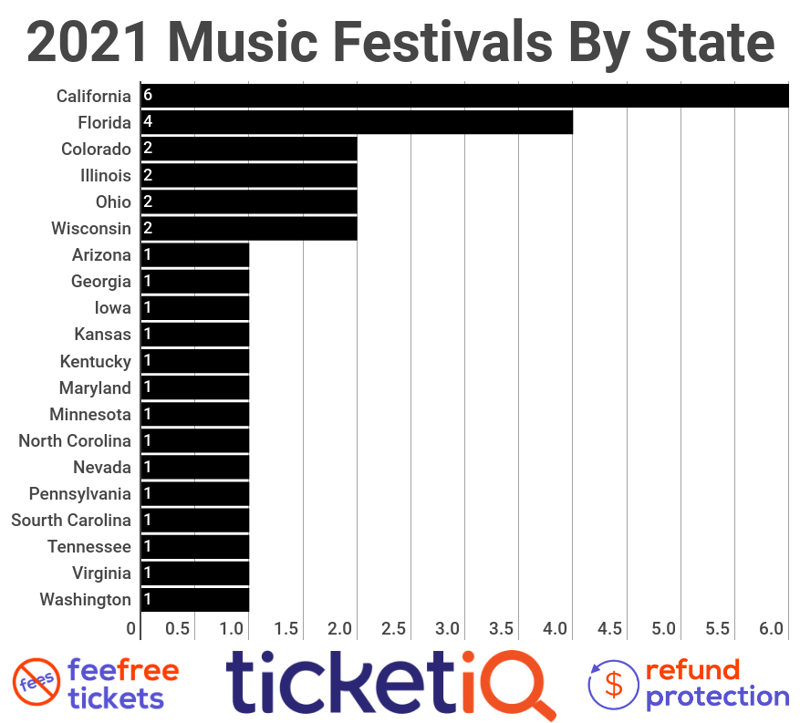 How To Find The Cheapest Washington Nationals Tickets

2022 Summerfest will take place over three consecutive weekends (Thursday-Saturday), on June 23rd to the 25th, June 30th to July 2nd, and July 7th to the 7th at Summerfest Grounds At Henry Maier…