Where To Buy 2019 Duke Football Tickets:

Face Value primary market tickets for Blue Devils home games are available for every game, including Notre Dame's first visit to Durham since 1961.  For the Notre Dame game, the cheaper price tiers are sold out, with only $99 and $136 face value tickets available.  For all other games at Wallace Wade Stadium, tickets are available in all price categories, with general admission tickets as low as $10 for the North Carolina A&T game, $15 for Georgia Tech, Syracuse and Pitt, $23 for the Miami game and $29 (sold out) for the cheapest Notre Dame tickets. There are also multiple choices of season ticket packages available, which range from $88 to $433.

On the secondary market TicketIQ has Low Price Guarantees on Duke football tickets for all sold out games and sections. TicketIQ also has Low Price Guarantees on all college football tickets, which means that if you find a secondary market ticket for less on a site like StubHub or Vivid Seats, we’ll give you 200% of the difference in ticket credit. TicketIQ customers save an average of 5%-20% compared to StubHub and Vivid Seats. Download the TicketIQ app for $20 off your first ticket purchase.

How Much Are 2019 Duke Football Tickets:

After kicking off the season against the Alabama Crimson Tide, the Duke Blue Devils return home to begin their home schedule against North Carolina A&T on September 7. The priciest game of the season will be November 9’s contest against Notre Dame.

Tickets for Blue Devils home games on the secondary market are averaging $71 after David Cutcliffe led Duke to its third straight bowl victory and second consecutive winning season last season. During his tenure in Durham, Cutcliffe’s highest number of wins is 10, which his team accomplished in 2013. 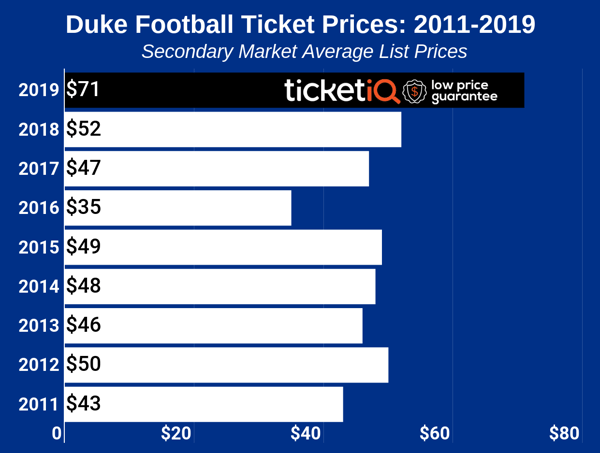 Ticket Prices For All Duke Football Home Games On The 2019 Schedule:

Duke faces a North Carolina A&T team that posted a 10-2 record and won the Air Force Reserve Celebration Bowl last season. This game has the cheapest average ticket for a Duke home game in 2019.

Pittsburgh has won each of its last four games against Duke, including the last two contests played in Durham. Duke will be looking for revenge, and the cheapest seats at Wallace Wade Stadium are just $14, the cheapest get-in price this season at home for the Blue Devils.

Duke hosts Georgia Tech one week after the Blue Devils’ first ACC home game of the season. Duke has won each of the last two meetings and four of the last five contests.

Duke has faced Notre Dame just five times in school history, and the two high-profile schools make this contest Duke’s highest-priced home game of the season. Duke won, 38-35, in the last meeting in 2016. The two squads have not faced each other in Durham since 1961.

Duke and Syracuse have faced each other just three times and their most recent meeting was in 2014. The Blue Devils were victorious in that contest, 27-10.

Duke’s regular season concludes with a contest against Miami, and Duke is looking to put back-to-back victories together against the Hurricanes for the first time in history. Last season, Duke was victorious, 20-12.