USC and Washington have one of the longest, if somewhat lopsided, rivalries in the Pac-12. The teams have played on and off since 1923, and USC has had several long winning streaks to give it a 51-29-4 all-time series advantage. The game is always a big draw in Washington, and this season is no different. This year's game is set for September 28 at Husky Stadium. Huskies fans are hoping the game goes something like the 2015 at USC (Full game below).

WHERE TO BUY WASHINGTON VS USC TICKETS

Fans can get tickets to the USC game, which is among the top three home Husky games in terms of demand on the secondary market, in several different ways. On the primary market, single-game tickets are available the team website via Primary partner Paciolan.

For fans looking to sit in the East End zone, tickets directly from the team are the only available option, with prices starting at $120.

For fans looking to sit on the lower-level sidelines, the secondary market is the better option, with more tickets in sections like 128 and 129 below. The majority of tickets in those sections from the team are sold out, with a few single-seat tickets remaining.

On the secondary market TicketIQ has Low Price Guarantees on Washington football tickets for all games on the 2019 schedule, in addition to Low Price Guarantees on all college football tickets, which means that if you find a secondary market ticket for less on a site like Stubhub or Vivid Seats, we’ll give you 200% of the difference in ticket credit. TicketIQ customers save up to 25%.

🎟 VISIT TICKETIQ FOR SOLD OUT WASHINGTON VS USC TICKETS 🎟

HOW MUCH ARE WASHINGTON VS USC FOOTBALL TICKETS

This game will be the third priciest on the secondary market, as demand has pushed the average asking price to $159, behind only $232 for the Washington State game and $191 for the Oregon game.

On the primary market, there is  availability remaining throughout the stadium, though in many cases, single-seats only.  Seats start as low as $55 at the corners of the upper deck, and go up to $250 for seats behind the benches.

But fans should comparison shop. TicketIQ shows availability throughout Husky Stadium, with seats in the upper decks starting at $69, and seats behind the benches starting at $340, but in both cases, with more opportunity to get a group of seats together.

A handful of sections are only available via the secondary market, including Sections 222 and 223 on the corner of the end zone. TicketIQ shows availability in both sections starting at $184 and $176, respectively. 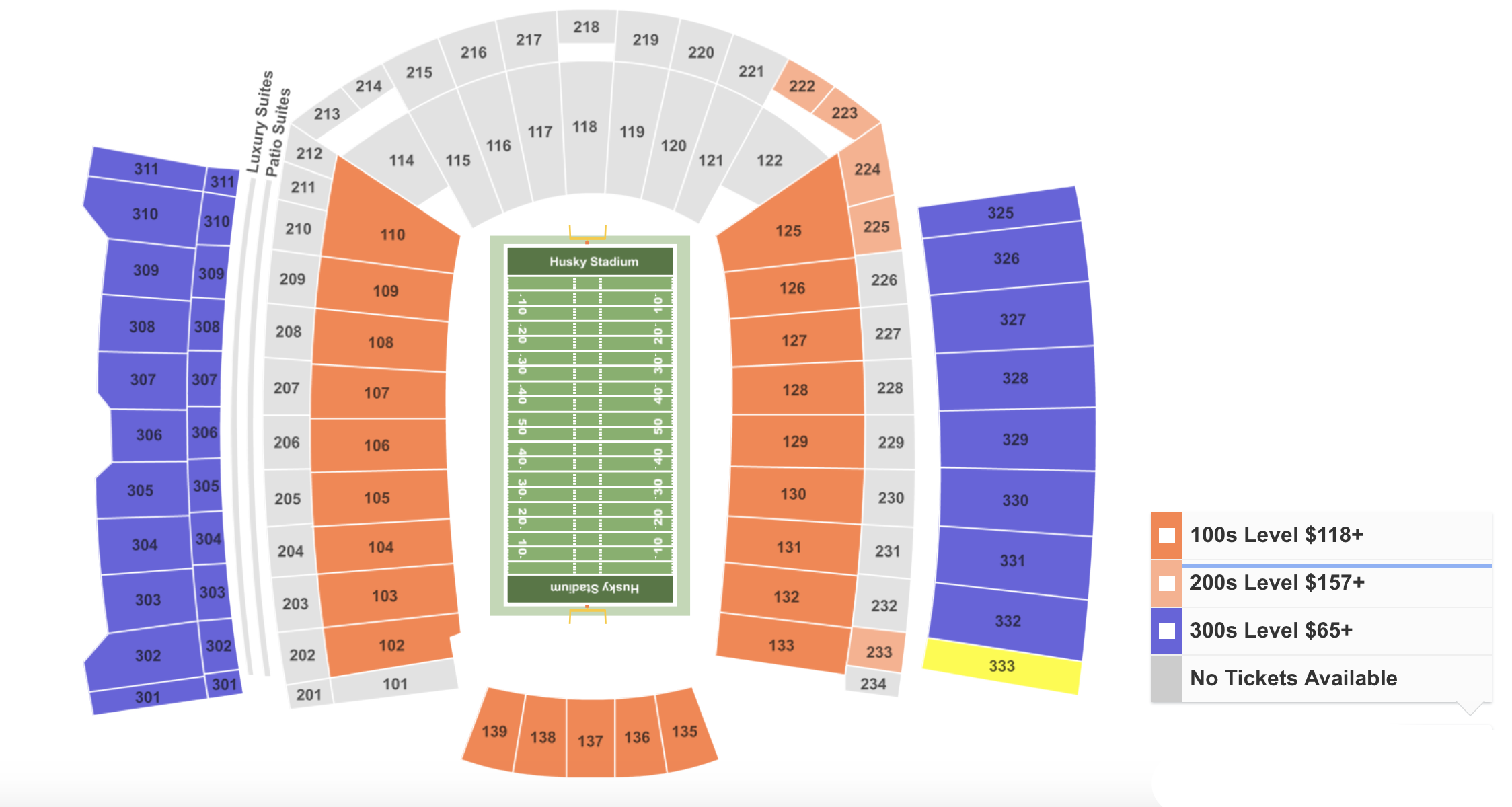