On the secondary market, TicketIQ has Fee-Free West Virginia Football tickets which also include a Refund Guarantee. Our Refund Guarantee states that if an event is canceled or deemed unfit for fans to attend, TicketIQ will refund ticket buyers in as soon as 15 days. That means that you can buy from TicketIQ worry-free. Customers on TicketIQ save between 15%-25% compared to other secondary market ticketing sites.

How Much Are 2021 West Virginia Football Tickets

On the primary market, West Virginia has recently rolled out a brand new three-tiered pricing system. Pricing tiers for single-game tickets are below: 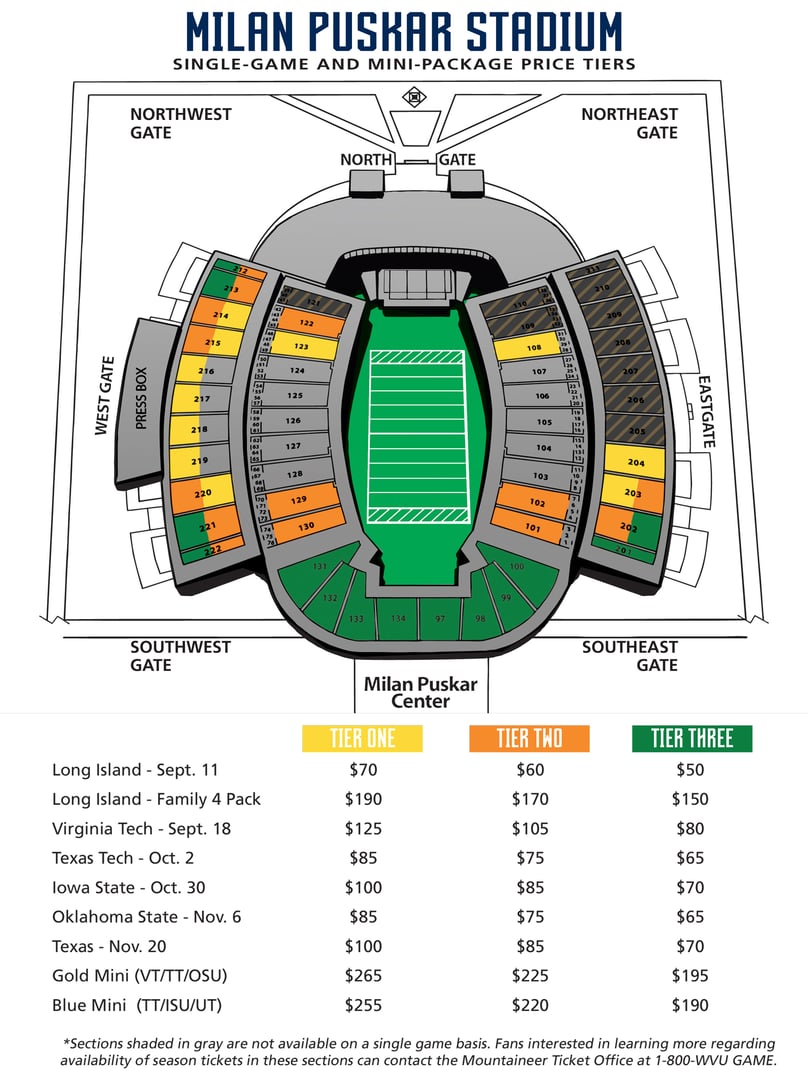 On the secondary market, prices for West Virginia home games start between $54 for their home opener against Long Island University. Middle-demand games, like match-ups against Texas Tech, Iowa State, and Oklahoma State, ticket prices start between $71 and $76 per ticket. Their two highest-demand games, vs. Virginia Tech and Texas, have get-in prices of $169 and $114, respectively.

On the high end, ticket prices for all home games can get as high as $700+ for lower-level sideline seats at midfield.

Season tickets are currently still available via the team's website, and they cost $365 per ticket.

There are also two mini-packages are available, which feature three games each. Fans can choose the Gold package for games against Virginia Tech, Texas Tech, and Oklahoma State games. The Gold package is priced at $195, $225, or $265 per ticket based on location in the stadium. There is also the Blue mini-package, which features games against Texas Tech, Iowa State, and Texas, The Blue mini package is priced at $190, $220, or $255 depending on the location in the stadium.

West Virginia football will operate at full capacity for the 2021 season.

How Much Are 2019 West Virginia Football Tickets

With Dana Holgorsen leaving for the Houston Cougars, former Troy head coach Neal Brown is taking over for the Mountaineers. Brown is coming off three consecutive bowl victories while West Virginia is on a three-bowl losing streak.

Tickets for West Virginia home games on the secondary market are averaging $138 at Mountaineer Stadium, which ranks 22nd highest in the nation. The Mountaineers’ most expensive home game this season is against the Texas Longhorns.

Prices For All West Virginia Home Games On The 2019 Schedule

The Mountaineers kick off their season on the last day of August against James Madison. The least expensive game of the season at West Virginia is the third matchup ever between the Mountaineers and Dukes. WVU looks to make their record 3-0 in meetings with JMU.

The Mountaineers and Wolfpack have faced each other just once since 1980. The Mountaineers were ranked 22nd in their last year with Bill Stewart when they fell to the Wolfpack, 23-7. West Virginia will seek revenge on September 14, as it attempts to stop a three-game losing streak against NC State.

The most expensive game at Mountaineer Field this season is against the Longhorns. Last season, West Virginia defeated Texas, 42-41, and this meeting was the third in a row that the road team was victorious.

West Virginia was victorious against Iowa State from 2014 to 2017, but the No. 6 Mountaineers fell at Iowa State, 30-14, on October 13, 2018. The Cyclones’ 244 rushing yards led them to their largest victory ever over the Mountaineers.

West Virginia has won each of the last five years against Texas Tech, including the 42-34 victory last year. The 2018 meeting was the first ever in which both teams were ranked: the No. 12 Mountaineers and No. 25 Red Raiders.

West Virginia has had difficulty against Oklahoma State, as the Mountaineers have dropped the last four contests. West Virginia scored 41 points in its four-point loss to the Cowboys last season.