Where To Buy 2019 Missouri Football Tickets

Primary market Missouri football tickets are available on the team website through Ticketmaster for the games against South Carolina, Ole Miss, West Virginia, Florida game, all of which have a face value tickets of $60 or $80. Of the power conference opponents, only the Tennessee game is sold out at Faurot Field. Season tickets start as low as $150 for GA ticket on the Hill, and go as high as $899 for the most expensive option, an 11th row ticket in section 212, on the 40-yard line.

On the secondary market TicketIQ has Low Price Guarantees on Missouri football tickets for all games on the 2019 schedule, in addition to Low Price Guarantees on all college football tickets, which means that if you find a secondary market ticket for less on a site like Stubhub or Seatgeek, we’ll give you 200% of the difference in ticket credit. TicketIQ customers save an average of 5%-20% compared to Stubhub and Seatgeek.

How Much Are 2019 Missouri Football Tickets

On the secondary market, tickets for the SEC games are generally more expensive at Faurot Field, with Ole Miss as the most expensive game of the season, with the cheapest tickets going for $60, which is 50% above face value. The cheapest game at Faurot Field is for Troy, where tickets start under $20.

The school is also offering a Fox Sports Midwest 4-pack option for Florida and Tennessee, with 4 tickets starting at $30 each, which saves 25% off of face price. 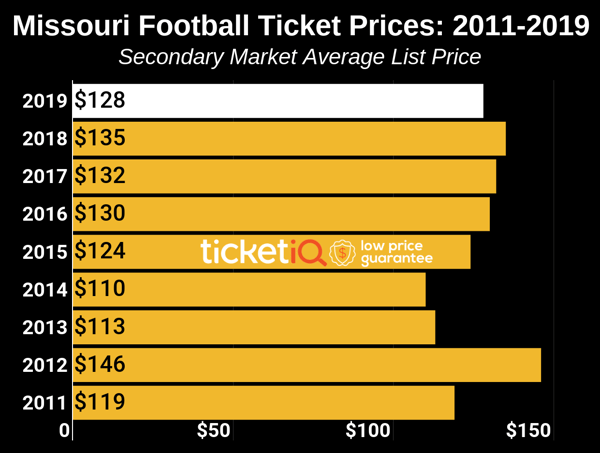 Ticket Prices For All Missouri Home Games On The 2019 Schedule

There teams first met in 1926 and played back-to-back games before taking a 66-year hiatus. They’ve played four times since 1993, and during that span, West Virginia has won three of four, including the last meeting in 2016 at Morgantown, when the Mountaineers won, 26-11. This game is one of four with a secondary market average asking price of more than $100.

This game is the first of three that Missouri and Southeast Missouri State will play over the next five years. The teams have played only twice before and Missouri won both meetings, including a 34-3 beating in 2015. This is the second cheapest game of the season.

The first home game of the SEC schedule, this game is the third cheapest of the season. SEC foes since 2012, South Carolina has won five of the last seven dating to 2012 and holds a 5-4 all-time series advantage.

The cheapest game of the season, this non-conference game has a unique spot in the middle of the season, offering fans a cheap chance to see the Tigers at home once they've hit their stride. The teams have played only three times before and Missouri won two of those meetings, including the last one in 2005.

Missouri has dominated Ole Miss over the years, but this game is the priciest on the secondary market and marks the first time since 2006 that the Rebels have visited Columbia. The SEC rivals last played in 2013 at Oxford.

These teams first met in the Sugar Bowl in 1966, but didn’t play again until they became SEC foes in 2012. Since then, Missouri has won four of seven games, including the last two, both by wide margins. This game is the second most expensive on the secondary market.

The third priciest game on the secondary market, these teams have a brief history. Since becoming SEC rivals in 2012, Missouri has won five of seven, including the last two, but Tennessee has some bragging rights — it beat Missouri, 63-37 in 2016, the most points either has scored against the other.

How To Find The Cheapest Missouri vs. Tennessee Football Tickets