How To Find The Cheapest 2020 NHL All-Star Game Tickets

On the heels of winning the Stanley Cup, the St. Louis Blues will host the NHL All-Star game for the third time. The game is set for Saturday, January 25 at Enterprise Center, and is the highlight of a weekend of activities that will run from Friday, January 24-Sunday, January 26. The Blues previously hosted in 1970 and 1988.

Primary market tickets for the NHL All-Star game, set for Saturday, January 25 in St. Louis, are sold out on the primary market. Tickets to the skills contest are also sold out. Fans can purchase a weekend package that includes tickets to the game, pre-game hospitality, a ticket to the skills contest and entry into NHL Fan Fair via NHL Experiences starting at $1,299.

On the secondary market, TicketIQ has seats to the game starting at $246. TicketIQ offers a  Low Price Guarantee on all sold out NHL All-Star Game tickets, Skills Competition tickets and Weekend Package tickets, which means that if you find a secondary market ticket for less on a site like StubHub or Vivid Seats we’ll give you 200% of the difference in ticket credit. TicketIQ customers save an average of 5%-20% compared to StubHub and Vivid Seats.

How Much Are NHL All-Star Game Tickets

The average asking price for a ticket to the NHL All-Star Game at St. Louis’ Enterprise Center is trending at $682, which would make it the second priciest since 2011, when TicketIQ began tracking data. The priciest was $962 last year at San Jose’s SAP Center, and the cheapest was $307 at Nationwide Arena in Columbus, Ohio in 2015. The cheapest ticket on the secondary market is trending at $254 this year. 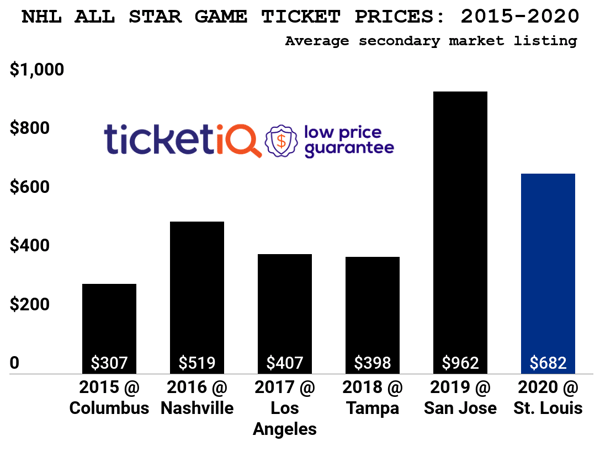 On the secondary market, seats are available on the 300 and 100 Levels. The 400 and 200 Levels are sold out. The cheapest seat with the TicketIQ Low Price Guarantee is $246 in Mezzanine Section 324 on the corners. Club Seats are available in Sections 101 and 126 between the blue line and the goal, starting at $496 for Row FF in Section 126 with the Guarantee. The best seats available are along the glass, starting at $567 in Glass 112G, Row C on the corner, while the priciest are $1,325 in Glass 122G, Row A behind one of the nets. Below is a screenshot of secondary market inventory and get-in price by zone. 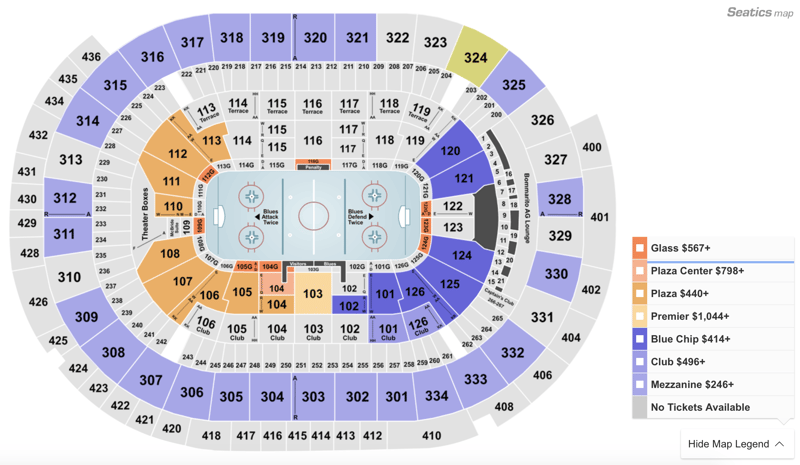 Secondary market tickets to the skills competition, which is set for Friday, January 24 at 7 p.m., start at $180 with the Low Price Guarantee. These seats are in Mezzanine 314, Row H on the corner. Club Seats remain in Sections Club 103, Row CC at center ice for $605 and in Club 126, Row EE near the net on the corner, for $653. Fans wanting to get closer to the action, could opt for seats along the glass, starting at $520 in Section Glass 118G, Row B at the penalty circles. Below is a screenshot of secondary market inventory and get-in price by zone for the Superskills Competition. 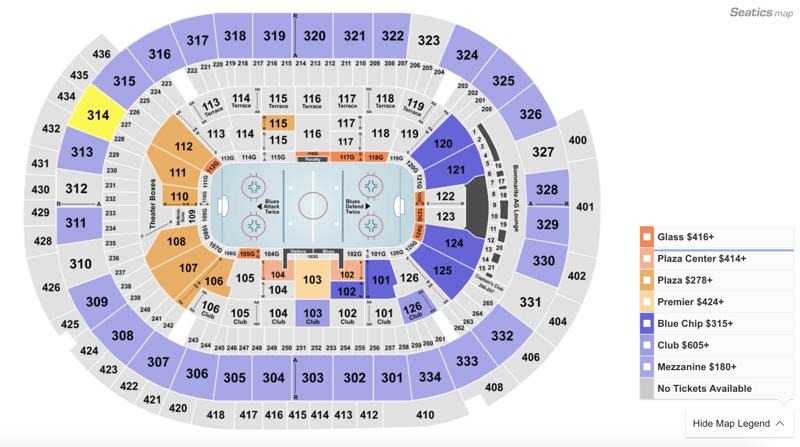